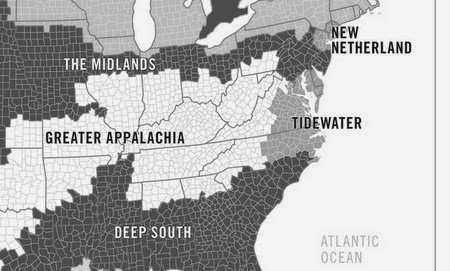 A couple of weeks ago I wrote that the real split in the Virginia governor’s race – and in opinion toward the Tea Party – is between the section of the state dominated by the centuries-old culture of Greater Appalachia and that of the Tidewater. Those – and nine other dominant regional cultures – are described in detail in my book, American Nations, and were summarized in this feature in the Washington Monthly two years ago.

To summarize the analysis of the Virginia results:

Across our country, the Tea Party has its greatest support in Greater Appalachia, home to a plurality of the House “shutdown caucus” and a culture that prizes personal sovereignty and individual freedom above all. It’s failed to capture hearts and minds in regions with a strong communitarian tradition such as Yankeedom, or even in the fast-changing Tidewater, whose aristocratic founders had a strong sense noblesse oblige lacking among the founding (West Indies) planters of the Deep South. […]

Cuccinelli won Greater Appalachia by an even wider margin, 57 to 36.

Some suggested this was nonsense, the results being better understood in “rural vs. urban” terms, which Democrat Terry McAuliffe dominating the cities, Tea Party Republican Ken Cuccinelli the rural areas. In a postscript I provided some early evidence this was a mistaken idea. Now I have some solid data to prove it.

I asked one of my student research collaborators — Miami University of Ohio’s Nicollette Staton – to run the results both by region and by the National Center for Health Statistics’ six-tiered urban-to-rural spectrum, which categorizes every U.S. county by level of urbanity, from those in major metropolitan regions (1) to the completely rural (6). The results were even starker than I expected.

By contrast, in Tidewater, McAuliffe won by large margins in counties large and small, taking five of the six categories. In the biggest cities he won 56.3 to 37.3. In the most rural counties he won by a convincing 51.0 to 41.1.

The only category he lost – “category 5” which consists of rural counties with a decent size town within them – was by far the least consequential, accounting for less than 12,000 of the more than 1.6 million votes cast in Tidewater that day and only 6% of the region’s overall rural vote. (Curiously, though, Cuccinelli won this sliver of counties by a staggering 61 to 32.9.)

So, no, Virginia’s was not an rural vs. urban election, and those who make plans based on that assumption may be in for unpleasant surprises in future.

Colin Woodard is the author of six books, including Union: The Struggle to Forge the Story of United States Nationhood, American Nations: The History of the Eleven Rival Regional Cultures of North America, and American Character: The Epic Struggle Between Individual Liberty and the Common Good.

CNBC’s Rick Santelli started it all by attacking Obama and a rescue plan that he called a subsidy for “losers.” Biden should be ready for the next Santelli.