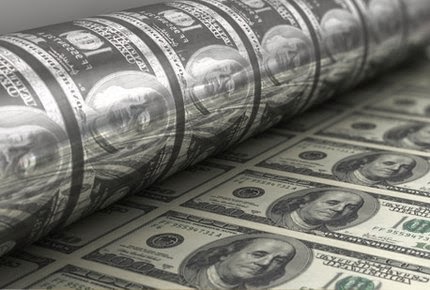 Since the financial crisis, Democrats have become understandably more interested in monetary policy. It used to be that Fed Chairs (remember Alan Greenspan) were everything short of outright worshiped, but it turns out that economics is far too important a subject to leave to the economists. This is all to the good.

But one thing that hasn’t gotten much traction on the left yet is reforming the way monetary policy operates. Adopting some kind of change to give our central bank more traction to fight unemployment will very likely be critical in the coming decades, as America’s economy continues to evolve.

My preference is this: enable the Federal Reserve to send newly printed money to every citizen. Sounds strange, I know. But let me first explain what’s wrong with current practices.

In a standard capitalist economy, the central bank (in American, the Federal Reserve) is supposed to ensure full employment by changing interest rates. To simplify a bit, if unemployment is too high and inflation too low, then we cut rates to stimulate investment and credit expansion; if inflation is getting out of hand, then we raise rates to do the opposite. The problem we hit in 2008 is that the Fed cut rates all the way to zero and it still didn’t lead to full employment. This is the infamous “zero lower bound,” and we’ve been stuck there for five years.

In response, the Fed has started purchasing assets with new money (“quantitative easing“) in an attempt to use the expectations channel and portfolio-rebalancing effects to create more investment and employment. This story gets complicated fast, but suffice to say that this policy hasn’t succeeded strongly. Though it has probably staved off a full depression, it hasn’t brought a quick return to full employment, and many elites are very uncomfortable with it, deploying a shifting variety of excuses for ending the policy as soon as possible.

The problem with quantitative easing is that while it almost certainly should work with a sufficiently determined central bank (just look at Australia), political and institutional constraints in America prevent it from working as well as it should. Sort of like how socialism beats capitalism in wartime due to high levels of political consensus but fails otherwise, you can’t work the expectations channel with a halfhearted central bank. Worse, skeptics then seize on the lack of success their foot-dragging created as evidence the policy doesn’t work.

Handing out money addresses all these problems by working in a much more mechanical fashion. If people have more money then they will spend it, or pay down debt, leaving them less credit-constrained. If people worry that the policy will create inflation, then they will move their money from cash and savings to durable goods purchases. All this coordinates in the same direction: more spending, fuller capacity utilization, and thus more jobs. There are also some salutary social justice effects. Gigantic asset purchases from the Fed probably increase the wealth of rich people, and little makes it down to the median worker. Handing out money to everyone makes sure everyone gets a piece of the stimulus.

But won’t just handing out money create skyrocketing inflation? Not so long as there is slack in the economy. In a full-employment economy, printing money increases prices (inflation) because everything is already being used, and people use new money to bid goods and services away from other people. But in a depressed economy like we have now, there are lots of idle resources (e.g., a huge pool of unemployed people), and new spending just moves those resources back into use. Therefore, we can hand out money (say, $1000 to every citizen, every month) until inflation starts to creep up past 4% or so. Then we’ll know we’re getting close to full employment, and we can back off slowly.

The major objection for this policy is that it will reduce people’s incentive to work, which might by addressed by tweaking the policy here and there. But you know what also reduces the incentive to work? A years-long spell of mass unemployment. The critical thing should be to end the unemployment crisis as soon as possible, then handwring about possible negative downstream effects afterwards.

Probably the biggest barrier to adopting this policy is that it sounds silly. Elite pundits tend to unconsciously shape their writings around what they deem politically probable, and the free money solution is highly unlikely in the short term. But how else is one to change the bounds of the possible? Some kind of change is badly needed, and at the very least, it’s time to start talking.