The only regret I had about the filibuster going down yesterday is that it didn’t happen in 2009, when it really could have done some good. Better late than never though, and now that the way has been made straight for a much easier confirmation process, the Democrats should get to work. They might lose the Senate in 2014, and there’s no time to waste. 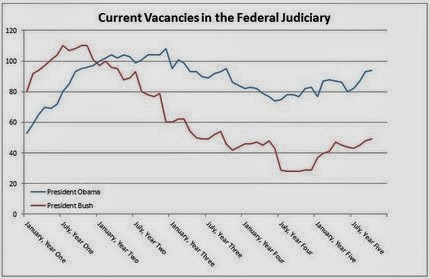 Second, the executive branch. Most obviously, empty posts should be filled. As of February, there were 68 unfilled positions needing Senate approval. I imagine that has diminished somewhat since then, but there are certainly still dozens sitting empty. However, this can also be a time for turnover. If someone needs to be fired or wants to leave, now is the time to make a break for it while a replacement can be confirmed easily.

Finally, the nomination process needs to be dramatically streamlined. This is partially due to senators submitting hundreds of largely frivolous questions, which could be sharply limited under the new Senate rules. A few dozen questions total and a couple hours’ worth of confirmation hearing would be more than enough.

But probably the most important factor is the White House’s insanely meticulous vetting. We shouldn’t be nominating criminals, of course, but there’s no reason on earth that it should take more than a couple days to look over somebody’s background. There would be a slightly increased chance of a minor scandal, but that is far, far outweighed by the reality of an executive branch rendered ineffective due to lack of staff strength.

I know President Obama prides himself on running a clean executive branch, but right now his legacy depends on executive action. Time to start batch-processing these nominations.