In its finite wisdom, the Federal Communications Commission is mooting an end to the inflight cell phone ban on airplanes. The likely impact of such a move may at first seem unpredictable, unless of course you know Humphreys’ Law of Captive Audience Rage.

Gordon Moore’s Law, famously, predicted the rate of increase in transistors and associated computing speed. I don’t know if his law holds true, but I do know that he made a enormous sum of money, so I decided to formulate a law of my own so that I also could sit back and let the bucks pour in. My law predicts Captive Audience Rage (CAR), a phenomenon that is familiar to anyone who has for example sat in a movie theater while another patron loudly discusses his highly important business leadership role as the proprietor of the third largest plumbing supply store in Kenosha, Wisconsin, or, has sat for two hours on a bus seated next to a 16 year old girl conducting serial conversations with 10 of her closest, most personal BFFs regarding her recent romantic reversal.

The formula underlying my law is simple: CAR = LOTOBFTLTOPCPC – POHWAITS.

The chart below has the variable definitions. Don’t be intimidated by the math. The central insight of the law is that LOTOBFTLTOPCPC is always going up whereas POHWAITS, alas, is a constant. As a result, any increase in LOTOBFTLTOPCPC invariably results in a commensurate rise in the area under curve: CAR. We can thus project that if cell phones are allowed on planes, CAR will continue on its ever expanding course. 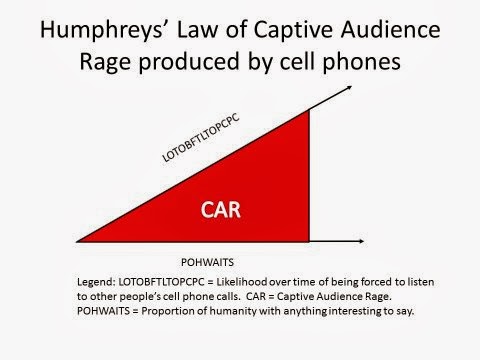