One aspect of last week’s Senate showdown still puzzles me: why did the Senate Republicans filibuster judges when they knew that their behavior could lead to the Democrats exercising the “nuclear option”? In hindsight, that is, the GOP blockade against Obama’s executive and judicial nominees seems a bad fight: now they will lose their ability to obstruct nominees and the Democrats will confirm their nominees anyway. It would have been better to concede ex ante, right?

Jonathan Bernstein provides a compelling answer. While it is possible this was a case of miscalculation (who knew the Dems actually meant it?) or thought they would score political points by forcing the Democrats to take the extreme step of changing the rules of the game, it is more likely that the Democrats’ reform solve a collective action problem the Republicans could not solve.

I would like to add to this account using the model from my book on filibustering (obligatory link here). My theory started with the idea that politicians care about both the outcomes they achieve and the rewards and sanctions of external actors for their actions. For example: Ted Cruz’s September “filibuster” had zero effect on policy outcomes but the attention he garnered was well worth the effort. I simplify the filibustering game to four steps:

(1 & 2) the majority (PRO) decides whether to make a proposal and what kind of proposal to make. Obviously for nominations the President actually chooses the “proposal.”

(3) the minority (CON) decides whether to filibuster

(4) the majority chooses its response from a menu of [surrender, closure, attrition, reform] 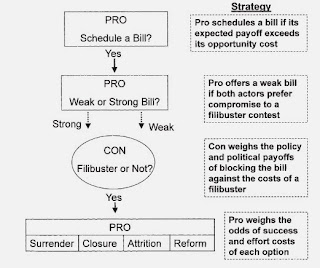 The benefit of this simple game is that it helps us understand how the decisions at early stages are influenced by actors’ expectations about their opponents’ future moves. For example, some bills are never scheduled based on the expectation that they would be filibustered.

Last Thursday we observed an equilibrium of [Filibuster, Reform]. That is, the Republicans had a clear understanding that continuing to filibuster would lead to a reform that deprived them of the ability to filibuster, but they did it anyway.

The Democrats’ position is obvious: revising the rules means that they get several key nominees through, including Fed chairwoman Yellen and DC Circuit judges who could be critical over the next three years. And, after four years of watching Republicans stonewall their agenda, there is ample enthusiasm for cloture reform among the liberal faithful.

What’s in it for Republicans? In the short to medium run, there are negative policy payoffs for this filibuster: all three DC Circuit judges will be approved, Mel Watt will join HUD, and the GOP loses the ability to block the occasional low-level nominee over the next three years. While Republicans stress that they will enjoy filibuster-proof nominations someday, a) I’m not convinced that politicians care about outcomes in 3+ years and b) I’m not convinced that the GOP will solve its demographic challenges by the 2016 elections.

That leaves filibustering for short-term political gain even if it provokes a rule change. Specifically, some subset of the GOP wanted to block these nominations. Or felt obliged to try for fear of being labeled a collaborationist by the conservative base. Here the model leaves out some nuance: any individual can decide whether to initiate a filibuster or not, forcing other senators on the same “side” to decide whether to support or oppose the filibuster. As Jonathan suggests, any senator who defected–even to avoid a “nuclear option” reform–risked being labeled a squishy RINO so even the pivotal 41st senator supported the nomination filibusters.

If this dynamic sounds familiar, perhaps this will help:

…but seriously, my point is that it is hard to understand legislative behavior as an attempt to change policy. When their “friends” are watching, they can be egged into doing things that make them worse off. We should have learned this during the government shutdown, but last week’s episode provided yet another reminder. In a sense, the Democrats solved the Republicans’ dilemma. Now they can vote against all of Obama’s nominees without consequences.