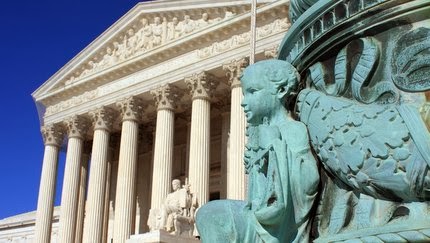 Loyal Monthly readers probably know that the Supreme Court has agreed to hear another challenge to Obamacare, this time to the so-called contraception mandate. The ACA requires a certain minimum level of coverage, and birth control is included as part of the package. HuffPo has a pretty good summary:

Dozens of companies have sued the Obama administration over a rule in the Affordable Care Act requiring most employers — with the exception of churches and religious non-profits — to cover the full range of contraceptives in their health insurance plans. The Supreme Court will hear the most high-profile case, filed by the Christian-owned craft supply chain Hobby Lobby, as well as Conestoga Wood Specialties Corp. v. Sebelius, a case filed by a Pennsylvania-based furniture company owned by a family of Mennonites. The cases will be heard together, likely in March 2014, with a decision expected in June.

With this Supreme Court, I would not be too surprised if contraception is gouged out of Obamacare. Though I don’t imagine very many employers would then leap aboard the unwanted pregnancy train, it would still be terrible news for women’s rights.

The question, though, is whether Republicans can afford to lose any more female votes. Juan Williams has a pretty good piece today on the Democrats’ increasing strength among women:

A 2012 Pew survey found that 57 percent of women favor Democrats. Young, single, gay, minority and pro-abortion-rights women have been with the party for a while. Older, white, married women lean to the GOP. But now married, churchgoing women living in cities are also voting for Democrats…A quarter of women now in Congress are freshmen elected in a 2012 wave that featured 20 female Democrats and only 4 Republicans.

But the most striking fact when it comes to women and birth control is this one: 99 percent of sexually active women use it.

Pundits have often pointed out that historically, neither party tends to dominate the political system for very long. The reason for this is that, like how corporations exist to make money, political parties exist to win elections, and if the party keeps taking positions that alienate huge fractions of the electorate, then they’ll change those positions.

But the GOP isn’t doing this. After the 2012 defeat, driven in large part by being absolutely crushed in practically every minority demographic, Republicans halfheartedly tried to choke down an immigration reform bill to at least stop the bleeding. President Obama signaled his support, and the Senate passed a half-decent measure. But now reform looks dead because House Republicans refuse to let the Senate bill come up for a vote. For the GOP, it’s almost the worst of all worlds: a bill supported by all the prominent Democrats goes down due to extremist Republican intransigence. Now Democrats get to blame the GOP for breaking their promise, and quite possibly increase their share of the minority vote. It would have been better to not do anything.

Something similar looks to be happening for women’s issues. Ken Cuccinelli just went down in the Virginia governor’s race largely due to his antediluvian views on women’s rights. The party as a whole would be best served by this debate just going away. But extremists have strongly-held beliefs, and don’t particularly care about clear-eyed electoral cost-benefit calculations.

Thus Republicans are stuck, again, attacking something which almost could not be more popular among a critical demographic. Maybe if they lose women by 20 points in 2016, they’ll wise up.