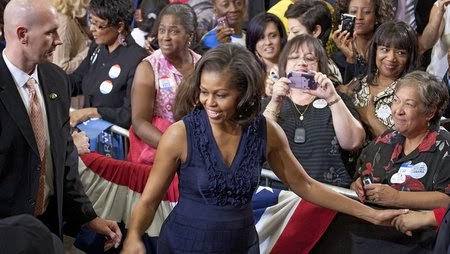 Over Thanksgiving break I spent some time thinking about the reactions to Michelle Cottle’s controversial Politico Magazine piece criticizing Michelle Obama for acting as an advocate for a relatively limited list of issues. “Gardening? Tending wounded soldiers? Reading to children? …Her Ivy League degrees, career success and general aura as an ass-kicking, do-it-all superwoman had some women fantasizing that she would at least lean in and speak out on a variety of tough issues. It was not to be,” Cottle wrote.

The responses from the media to Cottle’s article were quick, negative and fierce—many coming from some of the smartest women I follow in journalism.

Roxane Gay in Salon wrote that Cottle’s article was a “rankly condescending piece of shallow provocation” that was really just a guise for the “white feminist agenda,” while her colleague, Brittany Cooper zeroed in on “white feminists’ consistent inability to not be racist.”

Amanda Marcotte in Slate wrote that, “Most feminists don’t really feel it’s appropriate to micromanage how Obama does her job.”

Noreen Malone in The New Republic contended that at the crux of Cottle’s piece was “the fairly offensive notion that in order to be feminists, women must be interested in a certain set of issues.”

The critiques went on and on, all of them hinging, in one way or another, on the idea that even so much as raising the question of what Michelle Obama should, or could, or would not do in her role as First Lady, was somehow outrageous. The consensus among the pundits I read seemed to be that enlightened and knowledgeable women should not even engage in this sort of conversation–that to wonder these things means you must be racist, ignorant, anti-feminist or all of the above. Marcotte argued that Cottle must have worked hard to cherry-pick the critical quotes in her piece; others asserted that Cottle simply lacked a basic understanding of feminist history and racial dynamics.

Something about their collective, vitriolic response felt very strange to me.

Do they really believe that no intelligent women—including African American women—wonder whether Michelle Obama could or should be doing more in her role as the First Lady? Is even so much as raising that question so terribly taboo? Michelle Goldberg might not know any women who wonder these things, but does that really mean that if the thought so much as occurs to a smart woman, she must be elitist, patronizing or racist?

There are, of course, a lot of good reasons to argue that the First Lady’s job is an incredibly fraught, difficult and complicated one; that Michelle Obama could not do more than she is doing now given the limitations of the position, or that she should not or need not do more than she’s doing now, even if she could, because she can do whatever she wants as an empowered woman. And there are good reasons to argue that Obama’s choices should be contextualized in the history of past First Ladies. How does she compare to her predecessors?

And there are, of course, a host of good reasons to look at Obama not only as an Ivy League-educated “superwoman,” but also as the first African American First Lady—an identity that, as Melissa Harris Perry shows in her insightful book, Sister Citizen, is fraught with its own complicated politics. Dana Goldstein rightly pointed out that Cottle’s piece didn’t include Harris-Perry’s point that African American women, including Obama, are trying to “stand up straight in a crooked room,” their decisions warped by stereotypes that impact their national understanding and self-perceptions.

Those are all points that should be taken into account. But we must also remember that Obama is a woman in a unique position of influence at a unique period in our history. It may be true that First Ladies in the past have taken on “softer” political issues like literacy and drug use, but they also occupied the role when what women could arguably do or say was quite different. Is it so wrong to discuss whether now might be the time when that position could, or should, be altered?

I worry that the writers and pundits who claim this debate is out of line, or that it is inherently racist, or that it is somehow already untoward or insensitive, are doing a disservice to our public discourse. I do not necessarily believe Obama should be doing more, but I do believe we should be able to raise that question in good faith. We as Americans, we as feminists, should be able to discuss these questions compassionately, respectfully, critically and intellectually.

Putting issues like childhood obesity and nutrition on the national agenda is important. And some convincingly make the case that focusing on those issues in isolation is an acceptable, even strategic use of her time. But the point here is that to merely challenge that assertion, to ask if there might be room for her to tackle some of the deeper sociological determinants that impact nutrition, such as housing, poverty, and education that contribute to the choices people make in nutrition, could also be an acceptable use of our time.

I do not believe Obama is a “feminist’s nightmare.” I do not believe that Obama should have to do more than she is doing right now. But I do believe we can envision a world where it is safe to ask whether she could or even should.