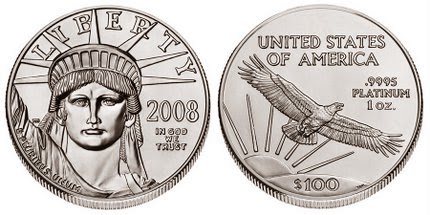 During the debt ceiling crisis, I was a strong proponent of the platinum coin option, where the government would use its seigniorage power to fund daily operation until more debt could be issued. Apparently, the president took this more seriously than people thought at the time:

WASHINGTON — The Obama administration was serious enough about manufacturing a high-value platinum coin to avert a congressional fight over the debt ceiling that it had its top lawyers draw up a memo laying out the legal case for such a move, The Huffington Post learned last week.

Unfortunately, we won’t learn the content of the actual reasoning:

The Justice Department’s Office of Legal Counsel, which functions as a sort of law firm for the president and provides him and executive branch agencies with authoritative legal advice, formally weighed in on the platinum coin option sometime since Obama took office, according to OLC’s recent response to HuffPost’s Freedom of Information Act (FOIA) request. While the letter acknowledged the existence of memos on the platinum coin option, OLC officials determined they were “not appropriate for discretionary release.”

This is too bad. Back in January, I talked to Harvard Professor Laurence Tribe about the coin option, and he said it was perfectly legal. I’d be curious to know if the Justice Department followed similar logic.