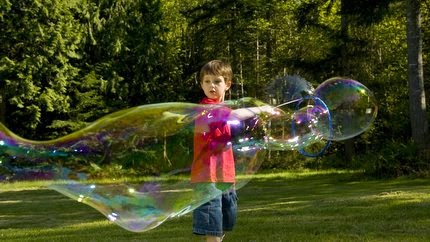 Better get used to these, kid.

Speaking of the American economy’s propensity to create bubbles, another way to consider the situation is to think of savings like any other commodity. Consider natural gas, for example. A huge amount of new gas sources from fracking have been flooding the US market. What happened? The price fell sharply.

Something similar has happened to savings. The corresponding “price” of savings is how much interest one receives on them. So when people start saving more, the rate of interest will tend to fall—other things equal, if there are a relatively more savings, people will pay less to borrow your money. Conversely, when interest rates are lower saving will be less attractive, and people will be induced to spend.

The issue now is that the Fed has driven rates all the way to zero, and there still isn’t enough spending to create full employment. So when people talk about the “global savings glut” and a new monetary system which could have negative interest rates, that’s the situation they’re talking about.

Negative interest rates make some sense, on the face of it: there is no inherent reason for people to expect to be paid for forgoing consumption. In fact, current spenders are risking future deprivation—why shouldn’t savers have to pay for the privilege of carrying purchasing power forward in time, if that’s what the Almighty Market demands? But our society hates this conclusion. The morality of saving is ingrained bone-deep, and people expect to be paid for being virtuous and abstinent. (Thus politicians complain to the central bank that it’s “punishing savers.”)

This, I believe, is a big reason behind the game of financial “innovation” whack-a-mole that has plagued us since 1980. (Deregulation is another factor, to be clear.) People expect a decent return for little risk, and the financial system cooks something up that fits the bill. The latest thing everyone is talking about is securitizing rental income (similar to how mortgages were bundled into the infamous private-label mortgage-backed securities in the run-up to the crisis).

I have no idea yet whether this particular scheme is something to be alarmed about. But it certainly has all the trappings of another bubble. The opacity factor in particular—where income streams are packed into complicated instruments, sliced up, and sold every which way—is not at all surprising. The only way to get a decent return on an investment in a zero interest rate environment is to take on a lot of risk, which is disliked or outright forbidden for many investors, so the risk is hidden through financial chicanery. Multiply that by a few hundred billion or so, and hey presto, the “natural” rate of interest can be propped up above zero, for a while.

The self-limiting nature of deliberately risk-obscuring financial instruments ought to be obvious. Eventually the facts on the ground become too stark to ignore, and either individuals and institutions take the hit, or the loss is washed through the state.

In any case, my prediction is that unless we create a new institutional arrangement better suited to our cultural beliefs about the morality of saving, the country is going to be stuck with this high bubble propensity for the foreseeable future.