Today Alan Rusbridger reported before the UK’s Home Affairs Select Committee to defend his newspaper’s right to publish leaked documents from Edward Snowden, and to deny that the paper had placed the country at a national security risk. Despite much hostile and deeply weird questioning, Rusbridger promised to continue publishing responsibly. 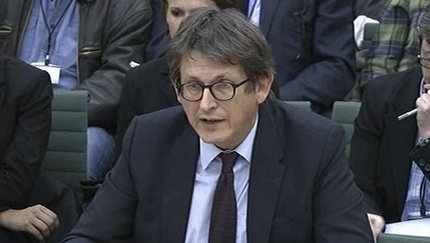 Alan Rusbridger, during the hearing livestream

Chairman Keith Vaz appeared to be winning the prize for “most startling question” when he asked Rusbridger, “do you love this country?” (The answer was yes.)

Conservative MP Michael Ellis, though, neatly stole that title from Vaz when he launched into a grilling of such snarling vituperation that Vaz had to angrily rein him in.

Ellis confused Rusbridger with a rant about an article which said that there was a gay pride group within Britain’s intelligence services. It was unclear whether he didn’t think people should know there were gay spies or whether he thought the members of a gay pride group would be unhappy if people knew that they were gay.

The implications for Rusbridger’s team could be serious. According to The Telegraph, Britain’s most senior counter-terrorism officer, Cressida Dick, has signaled that authorities were “indeed” investigating whether The Guardian violated portions of the Terrorism Act of 2000 by publishing the Snowden docs.

The real tell here, as Chris Hayes has pointed out, is that publishing classified documents isn’t the actual issue–publications which leak classified information flattering to the government tend not to get hauled before angry McCarthyesque tribunals.

On the other hand, the UK Parliament seems to have united the world press around support for the Guardian, much like Nixon’s persecution of Daniel Ellsberg did. US-based news organizations, led by The Reporters’ Committee for Freedom of the Press, sent a letter in opposition to the British parliament for what they understand to be an attack on press freedom in Britain, which can be read in full here. An excerpt:

Recent disclosures concerning secret activities of GCHQ and the U.S. National Security Agency may have embarrassed or angered political leaders, but they have educated the public on critically important matters and sparked a valuable global debate over the proper exercise of the vast surveillance powers that now exist. It is the responsibility of journalists to provide the type of accurate and in-depth news reports published by The Guardian and others that have informed the public and framed important, unresolved issues concerning the balance between security and privacy.

What’s more, dozens of the top staffers from the world’s biggest and most respected press outlets (from the NYT to La Monde to Der Spiegel and more) sent messages of personal support to the Guardian. Though I don’t envy Mr. Rusbridger, this could have been a serious overreach from Parliament.