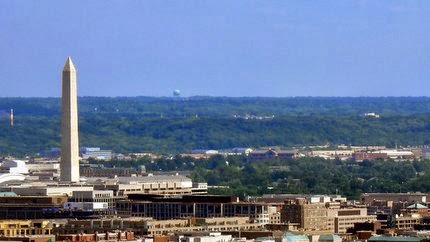 There was a hearing yesterday on the DC Height Act on the DC city council. Here’s something strange out from the Roll Call writeup:

In contrast to Gray’s recommendation that the city be given more authority, Council Chairman Phil Mendelson submitted testimony asking that the law be “left alone.”

“The clear and deeply felt support for preserving the Height of Buildings Act is due in part to the complete lack of specificity as to where heights would be raised or by how much,” he wrote. “Residents across the city are afraid that if the Height Act is changed now, the city’s unique skyline and human scale will be lost irretrievably.”

The seats of the Rayburn room were packed with members of the public supporting his position, sporting “SAVE the HEIGHT ACT” stickers on their lapels.

As usual, the debate is all about vague aesthetic values and almost totally ignores the issue of sky-high rents and a potential gusher of tax revenue. But, as Aaron Wiener points out, the debate over the Height Act is in large part about home rule, since it is a federal law imposed on the city in a basically colonial fashion (remember, DC has no voting representatives in Congress). Darrell Issa is not far from the mark when he said:

Issa mocked a resolution Mendelson proposed to that effect as a rejection of home rule, saying it sounded like the council was saying “please don’t give me the authority, I can’t be trusted.”

But my question is just who are these people sporting “save the height act” stickers? I don’t see that slogan anywhere official online. Phil Mendelson is the city council’s member-at-large, so one can’t pinpoint a single ward, but apparently 12 out of the 13 council members are against the change.

If this photo here is any guidance the culprit is the usual one: old white people. Meetings like this will tend to systematically select for retired busybodies, but on the other hand I suspect young reformers aren’t going out of their way to attend these meetings (I certainly haven’t). Maybe real estate developers can start recruiting.

UPDATE: According to Ethan Epstein, it wasn’t just old white people, it was old people generally, and there were indeed some young reform-minded folks there too. Good to hear.

UPDATE II: See another try at this here.