The Boston Globe recently ran a profile of the bipartisan advocacy group No Labels, which purports to help Washington overcome gridlock and get members of Congress working together across party lines. The article does a fairly thorough job of excoriating the group, falling just short of labeling them a bunch of cotton-headed ninnymuggins:

No Labels has been unable to advance, in any meaningful way, a single item from its relatively modest list of goals. Critics dismiss it as window dressing, with some congressional staffers comparing it to a high school civics project and going as far as drafting memos to their bosses urging them not to join.

Several supporters of No Labels quoted in the article, including former Republican Utah Governor Jon Huntsman and Democratic fundraiser Nancy Jacobs, try to paint the group as encompassing a broad range of ideologies. “It’s not about people who are centrists,” says Jacobs. Is this true?

I compared the voting records of all 79 members of the US House who are No Labels members with those of the entire chamber. The graph below displays a density plot of ideal points. What the graph shows is that No Labels’ members are substantially more moderate than the House as a whole. It draws from more conservative Democrats and more liberal Republicans, and while No Labels members are themselves polarized, they are not nearly as polarized as the whole chamber. 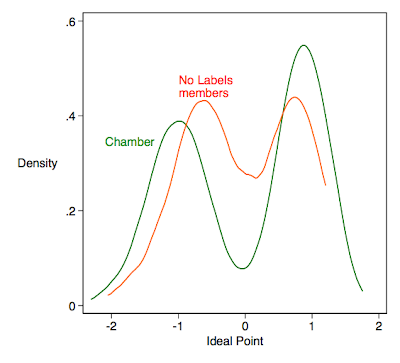 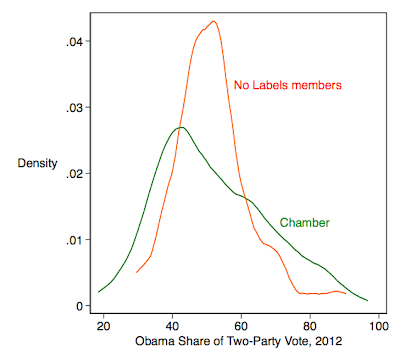 Who is it reaching? Well, one example of a No Labels House member is Rep. Mike Coffman, a Republican from Colorado’s 6th district. He was first elected when the district was deeply conservative, but then it became very competitive after the recent redistricting, and he is likely facing a difficult reelection race next year. Publicly joining No Labels is a smart move for someone like Coffman, allowing him to costlessly signal a commitment to bipartisanship without having to actually do anything bipartisan. I’m confident that many of No Labels’ members are in similar situations, using the group as a signaling device. Joining No Labels doesn’t make too many people mad. Voting with the other party does, which is why very few politicians do it, even though that’s just the sort of thing that would have to happen if No Labels were to be a successful movement.