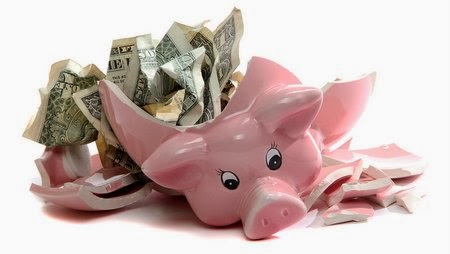 I’m sorry, you can’t be having that and eating too!
As the House and Senate Agriculture committees attempt to hash out a final version of the farm bill, food stamps are at the center of the fray. The House version proposed almost $40 billion in cuts to SNAP over the next decade, while the Senate proposed cutting only a fraction of that—just over $4 billion. But last week, the Senate announced it would consider steeper cuts to SNAP.

As the negotiations continue, the House is wielding its most significant bargaining chip—the threat to eliminate what’s known as “broad-based categorical eligibility,” a mechanism that 43 states use to adjust or eliminate federally imposed asset limits for families’ food stamp eligibility.

As it is, the federal asset limit for SNAP is $2,000; families with more than that in savings or investments are, according to federal law, ineligible for food stamps. While these limits were originally designed to deter rich individuals from abusing the system, New America Foundation asset policy researcher Aleta Sprague argues that, in practice, most states now recognize they are an “an antiquated and regressive policy.”

This would be a disaster. For one, federal asset limits impose high logistical costs on the state-administered programs, whose staffs would be called upon to investigate all applicants’ assets—a time consuming process complicated by the fact that what qualifies as an asset varies from state to state, as does the way states go about verifying the assets. Reinstating these costs is simply not efficient: the average household receiving SNAP benefits has only $333 in total assets.

Additionally—and perhaps more importantly—most experts agree that asset limits are simply bad policy. They discourage poor families from saving in case of emergencies, like car trouble or medical problems, which is precisely the opposite of what the government should be promoting. “We simply understand much more about assets and savings then we did a decade ago,” said Dan Lesser, the Director of Economic Justice at the Shriver Center. Based on this new knowledge, some states are even pushing to get rid of asset tests for other welfare programs like Temporary Assistance for Needy Families (TANF). Both Hawaii and Illinois eliminated their asset tests for TANF participants this past year.

Proponents of asset limits tend to rely on anecdotal, “welfare queen” stories to back their arguments. For example, two low-income Michigan residents recently won the lottery and continued to receive SNAP benefits despite their winnings. While the scandal made for great headlines, it also prompted Michigan to reinstate its previously eliminated SNAP asset test, even after they moved to close the lottery loophole.

Though most experts were dismayed to see House negotiators call for eliminating the categorical eligibility provision, they agree that it’s unlikely to happen. “I don’t believe the Senate is going to go along with changes to categorical eligibility. From what I can gather it’s more of a bargaining chip,” said Lesser. “It’s something they can put out for the base.”

The alternative, however, isn’t pretty either. Steeper Senate cuts are more likely to come from a crackdown on a program nicknamed “Heat and Eat”, where small amounts of fuel assistance are distributed to SNAP recipients who often have to decide whether they will pay for food or pay for heating. The Congressional Budget Office estimated that ending “Heat and Eat” would result in 500,000 SNAP households losing up to $90 a month in benefits. The deal would be struck just as winter approaches, a time when children in low-income families consume fewer calories and are at greater nutritional risk when utility costs are higher. A Census Bureau report released in September found that food stamps have helped lift almost four million people above the poverty line and have kept tens of millions more from becoming poorer.

Deciding between cutting poor families’ access to food or heating leaves no good options. But at the very least, Congress should leave states’ discretion over asset limits alone. It’s a bad idea to play chicken with smart, research-supported policies that encourage savings, and help individuals prevent disaster from unexpected financial shortfalls. Maybe it helps rally the Republican base, but it doesn’t do much more than that.