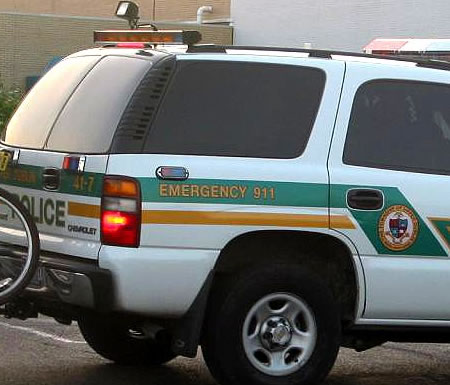 I’ve long been more than a little concerned with the role of campus police in the American academic system specifically because, as we’ve seen from numerous reports about college sexual assault, these guys are structurally more concerned with protecting their universities than protecting students.

It gets worse. Now, it turns out, campus police aren’t just working on campus; they’re now serving as neighborhood police, too.

According to Associated Press article at ABC News:

As colleges and universities consider how best to safeguard the community, several have recently weighed whether to arm their officers — a debate that inevitably resurfaces after cases like the shooting this month of a Texas college student by a campus police officer during a traffic stop.

It’s not uncommon for campus police to have mutual aid agreements governing their relationship with local law enforcement, laying out the geographic boundaries of their authority and the circumstances under which they can make off-campus arrests.

It’s not like colleges are just taking over, of course. It’s with the full agreement of the real police.

But some universities are hiring additional officers to cover extra off-campus ground themselves. The primary purpose is to respond to complaints from or about off-campus students, but in many cases the officers hold the same law enforcement authority as municipal police and can arrest people, such as drunk drivers near campus, with no university affiliation.

To a certain extent this makes sense. In many college towns the distinction between the school and the town is ambiguous, or virtually nonexistent. It makes sense that if campus are working to enforce justice in a particular geographic area, they also want to control the surrounding areas where students may live and hang out. And the areas where “campus” crimes actually start or end.

But campus police aren’t really very good police. This is not to say that they’re incompetent or evil, but they’re not around just to help victims and prevent crime. They’re also there to show the college in a positive light and prevent any potential problems from adversely impacting the school for which they work.