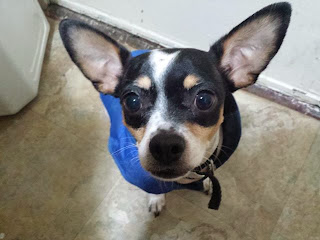 Here’s the background: Monty — seen in the photos above and below — is my adorable 4-year old chihuahua mix. He’s a rescue dog I adopted from an animal shelter. He is a very popular fellow — the kind of dog that children want to pet the moment they lay eyes on him. I always say yes, because Monty is so friendly and so gentle. (My favorite question ever asked about Monty by a small child: “Is that a cat or a dog?”) My boyfriend says Monty is his favorite small dog of all time — and he has plenty of experience with canines on which to base that judgment.

The one thing I didn’t realize about Monty when I adopted him two years ago is that Chicago winters would be so harsh on the little guy. His ancestors are from south of the border, of course, and his coat is very thin. I dealt with his shivering and aversion to the cold by buying him a fashion-forward little winter coat, which you can see him modeling in these photos.

A bigger problem revealed itself after the first major snowfall, with the salt that was spread on the ice to make it melt. Monty’s little paws are extremely sensitive to the salt — as I learned when he gave a blood-curdling, mandrake root shriek when he stepped on some of it.

What to do? I tried those little dog booties, but they didn’t work too well. It seemed liked as soon as I would get the fourth one on, the first one would fall off. Finally, I discovered an ointment that protects dogs’ paws from saltburn. That stuff really does work, but it’s expensive — and Monty, tiny as he is, runs through a lot of it.

What does all this have to do with the fundraiser, you ask?

2. With the help of your generous contributions, the Monthly can continue to afford to pay me.

3. Since I get paid, I can afford to buy the paw-protecting ointment for Monty.

You can make your tax-deductible contribution here. Thank you, and have a wonderful holiday. 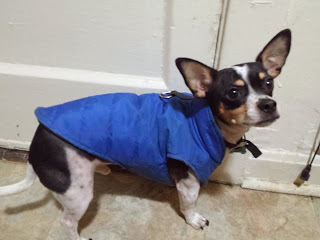 Kathleen Geier is a writer and public policy researcher who lives in Chicago. She blogs at Inequality Matters. Find her on Twitter: @Kathy_Gee