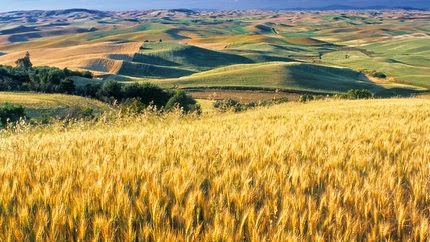 There have long been reports that much farmland in China is too poisoned to grow food—this WSJ report from earlier this year told the story of rice farmers who grew inedible product only to qualify for a subsidy from a local chemical factory.

Turns out the situation has gotten so bad that the government has had to fess up and declare 8 million acres of land too polluted to farm.

The Chinese government has said that the country needs at least 120 million hectares of arable land to ensure it is able to meet the vastly populated country’s food needs. Though China started 2013 with a strong 135 million hectares of arable land, contamination — paired with recent efforts to convert farmland to forests, grasslands and wetlands — has caused the amount of stable cultivated land to drop to 120 million hectares, Wang said. Wang also said the country is committed to spending “tens of billions of yuan” a year for projects aimed at rehabilitating polluted land.

High levels of contamination caused by pollution are nothing new for the people of China, who have been caught in somewhat of a pollution storm in the last year. A major source of the country’s pollution is its 2,300 (and growing) dirty coal plants, which helped Beijing in January experience its worst air pollution on record — levels of particulate matter topped out at 723 micrograms per cubic meter. The World Health Organization (WHO) considers 25 or less micrograms per cubic meter ideal for human health. Above 300 is considered hazardous.

This is a yet another example of the way environmental devastation can have seriously adverse economic effects. To phrase it in centrist VSP-speak: China’s electricity generation sector is in need of serious structural reform—it’s literally stealing from the future! China can’t afford to be burdening future generations with these expensive restoration projects. They need to get serious, get tough, buckle down, and put this sector on a more responsible long-term footing.

See, even Alan Simpson could dig that, right? I await the speaking engagements from Third Way.