When discussing North American regionalism one is bound, sooner or later, to explore the stark division of the country between Waffle House and IHOP restaurants, two franchises whose territories almost never overlap. Yesterday over at the Washington Post’s The Fix, Chris Cillizza obliged, demonstrating with state-level data that Waffle Houses are concentrated in states won by Republican nominee Mitt Romney in the 2012 presidential election:

“Mitt Romney won 16 of the 25 states that have at least one Waffle House. In those 16 — call them Waffle House America — he averaged almost 58 percent of the vote, roughly 11 points higher than he won nationwide. …. Of those 25 non Waffle House states , Romney won just eight in 2012: Alaska, Idaho, Montana, Nebraska, North Dakota, South Dakota, Utah and Wyoming. He took an average of 47 percent of the vote in those 25 states…

But, at the least, the remarkable overlay between Waffle House America and the Romney States of America speaks to the remarkably divided state of the country. The self-sorting/silo-ing of America extends beyond what we read, watch and listen to — it extends all the way to what we eat.” 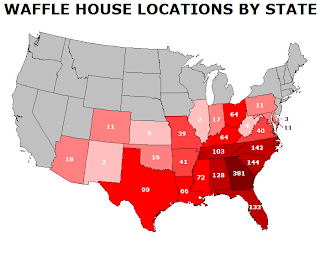 Indeed, the differences – in this and all other regional divisions – are far more profound if you analyze them based on the continent’s real cultural fault lines, which don’t match state boundaries. The real regional map below is from my book, American Nations: A History of the Eleven Rival Regional Cultures of North America, and is based on the initial Euro-American colonization patterns, most stemming back to separate colonial clusters on the eastern and southwestern edges of what is now the U.S. For those looking for a cogent summary of these eleven cultures and their characteristics, read this; if you’re really in a hurry, go here.

Consider this: of the 1661 Waffle Houses in the country, there are exactly zero in New Netherland and the Left Coast, which together have a population of 35 million. There are just 10 in all of Yankeedom, which has 55 million people. Those three nations – the “blue” coalition of contemporary politics – comprise 29 percent of the national population, but just 0.6 percent of all Waffle Houses.

Consider the two “Swing States” with a significant Yankee section: Pennsylvania and Ohio. Of Ohio’s 64 Waffle House locations, only 8 are located in the Yankee-settled Western Reserve. In Pennsylvania, only 2 of 11 locations are in the belt settled by New Englanders, where Yankee and Appalachian settlers once squared off in the Yankee-Pennamite Wars. Not one of Indiana or Illinois’ Waffle Houses are located on those states’s Yankee turf.
Further, Waffle House – founded in Georgia – has taken hold only in the Deep South, Greater Appalachia, and the Midlands. It’s owners have unconsciously avoided aggressive expansion outside of this cultural “comfort zone,” spurning El Norte zones in states where it is otherwise active. There are 99 Waffle Houses in Texas, but not one is in that state’s massive El Norte section. None of Colorado’s 11 locations are in that state’s (admittedly rural) El Norte section, while in Arizona, only 5 of 18 are. New Mexico – a state dominated by El Norte – has but 2 locations.

So yes, our “self-siloing” does indeed extend to where we eat, even if we’re all consuming pancakes and sausage when we get there.

Colin Woodard is the author of six books, including Union: The Struggle to Forge the Story of United States Nationhood, American Nations: The History of the Eleven Rival Regional Cultures of North America, and American Character: The Epic Struggle Between Individual Liberty and the Common Good.