In a thought-provoking piece on Monday, Brendan Nyhan suggests, “Maybe it’s time for Americans to admit that we like the familiar faces and names of politicians from famous families.” And maybe he’s right. But in the context of contemporary party politics, there are a few differences between a potential Bush or Clinton dynasty and the political dynasties of the past.

First, either a Clinton or Bush dynasty would be national, not regional. Among the various American political “dynasties,” only a handful cross state lines – the Rockefellers, the Harrisons, and the Udalls (although the latter has stayed in the interior west). A few more recent father-son combos have governed in or represented different states – Mitt and George Romney, Rand and Ron Paul. Most American political families – even those that include presidents – have been based in a single state, like the Cuomos, the Dingells, and the Frelinghuysens.

The Bushes span generations, states, and regions. The two President Bushes launched their political careers in Texas, while Jeb, whose theoretical presidency we are considering now, is based in Florida, and Prescott Bush, got the family political business started by representing Connecticut in the Senate. George H.W. Bush served in Congress for two terms before ascending to national levels of government, serving as an ambassador, RNC chair, and director of the CIA before joining the presidential ticket in 1980. His son served as governor of Texas and moved from there to the White House. Jeb, if elected, would follow a similar trajectory to his brother in that he would go from state-level executive to the presidency, and to his father in that he would have several years out of electoral politics before reentering the presidential arena. In other words, this would be a dynasty that not only crosses state lines but also one in which the office held in common would not be the governorship or a House seat, but the presidency – an office with such capacity for unilateral power that a Constitutional convention delegate referred to it as “the fetus of monarchy.”

There are important differences between the potential Clinton and Bush dynasties, of course. The Clinton political legacy hasn’t (yet) crossed generational lines, and a husband-wife dynasty is something of a different animal. But the broad contours would bear some similarity to a national, presidential dynasty. Bill launched his national career from Arkansas, while Hillary (controversially) chose New York to begin her political career. The main office in common, once again, would be the presidency.

Political dynasties seem to have mainly emerged as part of localized machine politics (as in the case of the Daleys) or during eras when the parties were not as well-sorted ideologically as they are now. A couple of dynasties actually cross party lines – the Roosevelts and the Rockefellers. But Teddy and Franklin Roosevelt both drew their ideas from a broad Progressive movement, and Nelson Rockefeller was among the last wave of Northeastern, liberal Republicans.

Clinton and Bush dynasties, by contrast, would be deeply entrenched in the candidates’ two respective parties. In this sense, family connections could operate in a similar fashion to other political linkages to the centers of party power.

Presidential elections are also different from Congressional or state-level contests. They generally play a bigger role in the nation’s political life. Furthermore, presidential elections without an incumbent occur regularly. Because two-term incumbents do not succeed themselves, their legacies are carried on by those who share the same party labels, administration connections, and last names. Unlike Congressional incumbents, who can continue to run for decades, the best presidents can hope for is to be succeeded by someone who will engage in debate about the definition of their leadership. Party ties create linkages between term-limited incumbents and those who hope to succeed them. Familial ties, along with direct political ties to an administration (serving as a VP or Cabinet member) can deepen these connections.

In the modern era, we see some evidence that elections between two candidates who are tied to party politics by family connection or administrative service (heirs) are different from other non-incumbent contests. Non-incumbent elections between two standard-bearers appear to produce a different dynamic than those in which one or neither candidate has a familial or direct political connection to national party power. 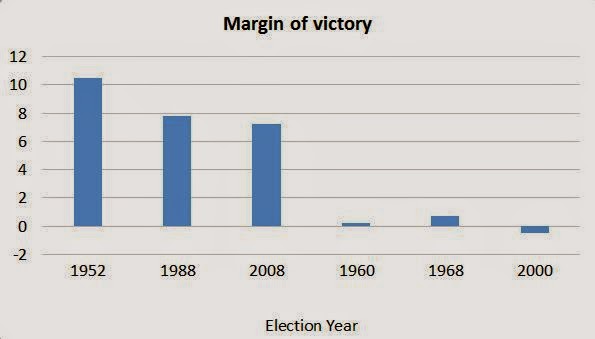 On the left, we see the victory margin in elections with one or no heirs. These are 1952 – Eisenhower had no discernible relationship to the Republican power structure, family or otherwise, and Adlai Stevenson had family connections to the Democratic hierarchy, though were removed by a generation. (Stevenson’s grandfather served as vice-president in the second Cleveland administration.) This group also features 1988, which had one political heir (George H.W. Bush, the sitting VP) and one outsider, Massachusetts governor Dukakis; and 2008, in which neither candidate had served as a high-level official in a previous administration, nor had any family relationship to party power players.

The second group includes non-incumbent elections with two heirs. In 1960, we have Richard Nixon, a sitting vice-president, and Kennedy, whose family connections linked him to bases of power within the Democratic Party. In 1968, a former vice president (Nixon) and a sitting vice-president (Humphrey) – two non-familial heirs to presidential administrations. Finally, in 2000 the Republican ticket featured a familial heir- George W. Bush – against a sitting vice president. The three elections on the left were all won decisively, with margins of seven percent or more. The three on the right were among the closest in U.S. history, with less than one percent margins.

There could be a number of explanations for this pattern. For example, the data could mainly reflect well-matched candidate quality in the elections on the right side of the graph. Or there might be unobserved characteristics of elections in which two political or family heirs choose to run, and win the nomination.

Setting these alternatives aside for a moment, what we observe in 1960, 1968, and 2000 is three very competitive elections. The candidates more easily stand in for the values, accomplishments, and flaws of the party establishment. There are no mavericks in this crowd, and the insider-outsider heuristic (sometimes an advantage, sometimes not) is unavailable. As a result, presidential elections can be much closer contests over evaluations of past administrations, debates about the legacy of major political changes like the New Deal, the Civil Rights Act, and the Reagan revolution, and fundamental questions about the direction of the country. It isn’t difficult to imagine a contest between Clinton and Bush turning into a national debate about the impacts of the Clinton, Obama, and (both, but especially W) Bush presidencies. This would probably have some advantages and disadvantages, but it would make for a different set of questions – and perhaps a different outcome – than an election between, say, Marco Rubio and Elizabeth Warren.

A national, presidential dynasty links lineage, worldview, and organizational power. At a time when demand for a third party recently hit a ten-year peak, and the electorate views parties as the most corrupt of all our institutions ), creating connections between political power, heritage, and ideology may serve to validate those views. Similar concerns exist – and have existed historically – about localized machine politics, of course. But a Clinton-Bush election in 2016 might create the impression that the parties are closed systems of beliefs and access to power. In the context of recent discussion over whether the U.S. is an oligarchy, this is worthy of deeper scrutiny.

A couple notes: I’m grateful to Lilly Goren, Lowell Barrington, and Kevin Miller for their help on various aspects of this post, but any mistakes or logical flaws are mine alone.