The National Collegiate Athletic Association announced Monday that it will pay former college football and basketball players some $20 million for using their images in video games.

This comes in order to avoid further litigation by former Arizona State and Nebraska quarterback Sam Keller, who was suing the NCAA for using his image and not paying him.

The settlement is apparently intended to preserve the NCAA’s precious amateurism rules, but it actually serves to emphasize, at least philosophically, why some college athletes aren’t really amateurs at all.

According to an Associated Press piece by Michael Marot:

Keller and his teammates used to eagerly await the annual release of the NCAA Football video game, the popular EA Sports product featuring lifelike depictions of every major team.

Judging the ability of his on-screen persona in the game was all in good fun, but once Keller’s career was finished the former Arizona State and Nebraska quarterback felt something wasn’t right. The pros collected royalties from EA’s Madden NFL game, for example, but the collegians couldn’t.

The settlement will provide athletes with between $400 to $2,000 each, depending “how many athletes file claims,” according to the article.

The NCAA has rules that prohibit student-athletes from making any money as students (other than their scholarships).

See, this is why players are starting to organize. Because the NCAA’s rules don’t seem to do much to preserve the idea of students first, athletes second. They do seem to have a lot to do with just making money off of them.

The television contract for the collegiate football playoff system is now worth $7.3 billion over the next decade. Men’s college basketball? That’s $10.8 billion over 14 years. But who’s doing the real labor here? They’re not getting any money. 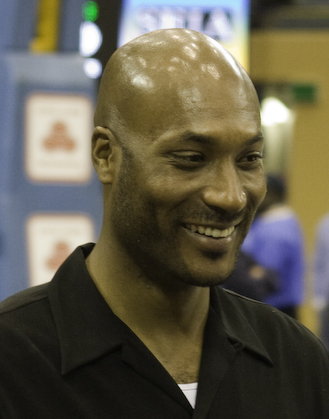 This comes at the same time that former U.C.L.A. basketball star Ed O’Bannon (right), who now works at a Las Vegas car dealership, is also suing over video games. But his antitrust case is a lot more troublesome for the NCAA. According to an article by Ben Strauss and Steve Eder in the New York Times

And that could potentially bring the whole damn system down.

College sports are a complicated matter. There’s a lot of money floating around, but none of it goes to the players, and no one seems really sure where profit exists and how. But even though there’s not much profit, there still seems to be an awful lot of theft. [Image via]