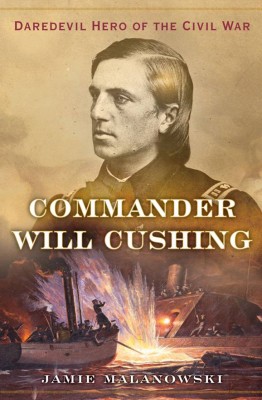 There is in publishing the fine old tradition of blurbing, in which the author of a book, and/or his agent and/or his editor, contact certain friends and associates who might be predisposed to like a new book, and to ask them to read the book and, if they like it, to write a short statement of appreciation. The exercise is rather like going to a christening party. All guests are expected to say nice things about the baby, so a certain amount of praise must be automatically discounted. At the same time, there is a way to artfully offer tepid praise that rare unattractive baby. Well, the blurbs are in, and I’m happy to say, even with the praise appropriately discounted, Commander Will Cushing: Daredevil Hero of the Civil War, has been met with enthusiasm.

“Commander Will Cushing is a happy combination of one of the Civil War’s best tales and a writer those taut, smart prose is up to the task of writing it. So much Civil War writing loses its luster in a an ocean of sheer data. In Malanowski’s hands the narrative just drives forward, carrying you with it. A superbly entertaining book on a subject that, somehow, everyone else overlooked.” — S.C. Gwynne, author of Empire of the Summer Moon

“Jamie Malanowski has brought to life one of the great, little-known swashbucklers of the Civil War. A fun, exhilarating rush of a read, this is history told with the flair and panache of a great journalist.” — Nathaniel Philbrick, author of Sea of Glory, The Mayflower and Bunker Hill

“A terrific book! It’s astonishing to me that I’d never heard of such an astonishing and very American hero. Will Cushing is like a character out of fiction or the movies — charismatic trouble-maker, patriot, half-mad can-do leader of men — and Jamie Malanowski beautifully tells the ripping yarn that was his remarkable life.” — Kurt Andersen, author of True Believers and Heyday

“Union Navy Commander Will Cushing’s sinking of the Confederate ironclad CSS Albemarle in October 1864 with a small, makeshift torpedo boat is one of the greatest and, until now, least known feats of daring in American naval history. Author Jamie Malanowski restores Cushing to his proper place in the first rank of American naval heroes in this fast-paced, rousing biography that illuminates both Cushing the man and the hero. Gracefully written and admirably nuanced, Commander Will Cushing makes a significant contribution to the naval history of the Civil War. ” — Peter Cozzens, author of Shenandoah 1862: Stonewall Jackson’s Valley Campaign, among other works

“Jamie Malanowski’s compelling history sheds new light on Will Cushing, a major naval hero of the Civil War. . . [who performed] one of the most extraordinary single-handed feats of the war.. The Cushing name reverberates through those years, with four brothers serving the North, including Alonzo, a cannoneer who fell at Gettysburg. . . But this story is about Will, and it’s a corker.” — Larry Smith, author of Beyond Glory: Medal of Honor Winners in Their Own Words