The U.S. Department of Agriculture has released its annual report on the cost of raising children, and the upshot is what you probably already know: It’s expensive.

This does not — as every article on the report has emphasized — include the cost of college, just the cost of raising them from birth through age 17. What struck me, however, was not the cost, but what parents are spending their money on: 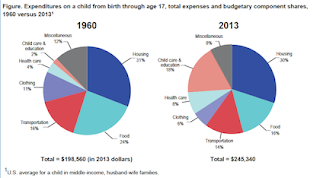 The last 50 years have seen a massive shift away from the basic expenses of keeping your kid alive and toward competitive expenses. Now, those education expenses are a bit misleading — as the report points out, many families basically have no expenditures in that category. Still, it’s remarkable how the averages have shifted. And that reflects a great difference in how we view the basic task of launching a child into the world. It’s no longer enough to make sure they’re fed and clothed; you also have to make sure they can beat the other kids in the education race.

If you’ve ever watched “19 Kids and Counting” and wondered how the Duggars (and families like them) do it, the answer is: They don’t do much beyond the basics. They spend a huge amount, more than $2,000 a month, on food. But before they became television personalities, the Duggars were living in a three-bedroom house with 14 kids. They buy all their clothes at thrift shops. They vacation in an RV. They home-school, and no one’s on a sports travel team or in dance classes. If they buy toys, it’s at a secondhand store. If average-size families did this, no one would be complaining about how expensive it is to have kids.

The problem is that it’s dreadfully hard to do this unless you’re in a very tight-knit subculture in which all this looks normal. If your kids go to school with other kids who aren’t wearing thrift-school clothing, they’ll be made fun of. They’ll learn to long for all the new toys the other kids have. They’ll want to join expensive activities, and you’ll want to get them tutoring and enrichment programs to increase their shot at getting into a good school. You certainly won’t want to cram them into a three-bedroom house. In other words, raising kids cheaply is only possible if you think there’s something even more important than socializing and getting a good education — or if you’re so poor that you simply lack the cash to help your kids compete in our society’s various status competitions.

What we have, in other words, is a collective-action problem that is steadily ratcheting up the amount we spend on our kids. Unfortunately, like many collective-action problems, it’s hard to imagine what sort of collective solution we could put in place. As long as it’s possible to spend money to give their kids a leg up, people will do just that — and other parents will do their utmost to spend even more.