I don’t want to pick on our friend Jonathan Bernstein but I get impatient with some of his analysis, although my beef isn’t particular to him. When we try to understand the outcome of the 2014 midterms, he advises us to “Forget redistricting, forget high-tech electioneering, forget money, forget all of it. Whoever is in the White House is the key.” This is a polite way of saying, at once, that the results are both Obama’s fault and not Obama’s fault.

For Bernstein, the president is to blame, but primarily his fault lies in merely being in office for six years, and only secondarily in having less than stellar approval ratings. The 2014 midterms didn’t turn on the way districts are drawn or messaging or the strength and weaknesses of individual candidates, or in how the media covered the campaign. They turned on a Democrat being in the White House, so people voted for Republicans.

Surely, there is some merit to this analysis. But it’s basically wrong. To understand why, let’s start with the House of Representatives. Talking Points Memo prepared a chart that demonstrates the problem very well. It looks at the results of the House elections in three states (Pennsylvania, Ohio, and Michigan) in both 2012 and 2014. (Click to enlarge) 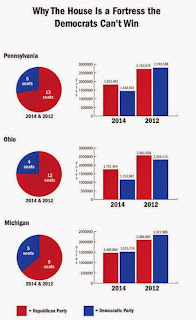 What this shows quite clearly is that despite an enormous difference in turnout between the two elections and despite changes in which party got more votes within each state in each election, there was no change in the result. In both elections, the Republicans wound up dominating the House delegations of all three states by the exact same numerical advantage. In Michigan, the Democrats got more votes both times and both times wound up winning just 5 of the state’s 14 seats. In Ohio, the Democrats got 200,000 more votes than the Republicans in 2012 and 600,000 fewer votes in 2014, and it didn’t have any material effect on the outcome. In Pennsylvania, the Democrats got 200,000 fewer votes in 2014 than 2012 (relative to the Republicans) and it didn’t hurt them a bit.

One could look at this as a disappointment for the GOP. They did so much better in 2014 and got no reward for it. The better way to look at it is that what the American people think doesn’t have any influence whatsoever on who winds up controlling the House. The results were the same whether the president was being reelected (as he was in all three of these states) or being disparaged as a drag on the ticket. It didn’t make a difference whether the incumbent governor was being drummed out of office (as in Pennsylvania) or reelected in a landslide (as in Ohio).

More than anything else, what determined the outcome was a combination of how the districts were drawn (by Republicans, in every case) and where Democrats and Republicans live relative to each other. The president could have been as popular as FDR at the height of his popularity, and it couldn’t have flipped more than one or two seats at the most.

The Senate and governors’ seats can’t be explained in the same way, but here the surprise was that the polls were so inaccurate and that (despite their overall inaccuracy) they moved so dramatically against the Democrats right after Labor Day and again in the last two weeks of the campaign. We can attempt to explain this movement by looking at what was actually happening at the time or we can argue that our models predicted this outcome all along because of some metrics we plugged into them back in the spring, as Bernstein does here.

Neither campaign rhetoric nor specific positions on issues are important enough to overwhelm the fundamental context of the election.

It’s hard for some people to accept, but the Democrats’ problem involved things they couldn’t control by better electioneering — the sixth year of a relatively unpopular presidency, the tendency of Democratic-leaning groups to skip midterm elections, a good map (at least for Senate races) for the Republicans, the perception of the economy.

Put those things together, and you get one forecast model by political scientists, based on information gathered in the spring, predicting Republicans would wind up with about 248 seats, which is about what they are headed for. It wasn’t campaign failures; it was the context of the election, which no magic words or even popular policies could do much to overcome.

Again, we can’t treat the gerrymandered House seats the same way we treat statewide elections. And, since Bernstein is making this argument to warn against the idea that Democrats could have done better with a populist economic message, it’s important to point out that economic populism is a serious effort to change perceptions of the economy by creating a new explanation for economic conditions. You can’t plausibly argue against the utility of economic populism by saying that it can’t fight perceptions of the economy because that is precisely what such campaigns are designed to do.

We’d do better to try to understand why the polls were skewed four points toward the Democrats. One clue might be that the polls were more skewed in states that have Appalachian mountains.

Why were people from this region more likely to feign undecidedness with pollsters or choose the Republicans at the last moment? I believe the answer is cultural and probably related to perceptions that the Democrats are the party for non-whites. I hope this theory will be tested.

Regardless, you can say that your models predicted a big night for the Republicans all you want, but I still blame the media. I blame the media for creating the first federal election season in my lifetime in which the elections weren’t the top story for the last two months of the campaign. By focusing so heavily on other stories, like ISIS and the Ebola virus, the media smothered the Democratic message. Here’s what I wrote on October 28th:

Let’s start with the media environment. I’ve actually been watching almost no politically related television for the simple reason that almost none of it has anything to do with the upcoming elections, let alone actual issues that might be taken up by the next Congress. The media has been keeping the country almost in an election blackout, with coverage mostly related to conflict in the Middle East and the Ebola virus (see, for example, current front-page of CNN.com). I don’t know how to account for this fear-heavy media coverage, but I do know that it cannot help the Democrats that they have not been able to get any kind of aspirational message in front of the electorate. I’m tempted to blast the party for incompetence, but the media simply isn’t covering any political messages at the moment. If the Democrats had a compelling message, I can’t honestly say that things would be appreciably better because the electorate would never hear it on the news.

So, this election about nothing is a new thing, and while I can anticipate that this favors the Republicans, I can’t figure out how disastrous this media environment is on, say, a scale of one to ten.

And here’s what I wrote on November 5th:

We have our answer now. On a scale of one to ten, the media coverage leading up to this midterm election was a TEN on the scale of hurting Democrats.

This is not to absolve Democratic Party strategists of any responsibility for this defeat, but the simple fact is that the polls were way off, basically eight or nine points [ed note: actually four points] too favorable for the Democrats. We cannot explain this polling error by reference to bad messaging. Something deeply emotional was going on with the electorate that caused them to break sharply against the Democratic Party beginning around the time of the first beheading by ISIS and then turning again sharply against us in the last days of the election, possibly related to anxiety over the Ebola virus.

The media are how these images and fears were primarily transmitted to the voting public, although the Republicans also made it part of their campaigns.

The 2014 Midterms were never going to be good for the Democrats, but political scientists did not predict or explain the exact outcome in the Spring. The outcome of the House elections was largely pre-determined, particularly in states where the districts have been carefully drawn by partisan bodies, but the Senate and governors elections were not pre-determined and could have had dramatically different results with relatively small changes in the contemporary environment, or with better candidates with better messages (if the media had allowed those messages to be heard).

The Democrats should not accept any analysis that argues that nothing they do, or could ever do, can change the results of elections. Even in House elections, reforms can be made to make our elections more responsive to the will of the people.

The Democrats will need to engage in what the Republicans derisively call class warfare or accept that they’ll never have enough power in Congress to govern effectively.