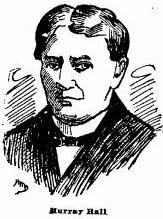 One of the scandals that rocked Tammany Hall at the turn of the 20th century was that of Murray Hall, a whiskey-drinking, cigar-smoking ward heeler and member of Tammany’s General Committee. Deathly ill, Hall consented to a physical exam, which revealed that Hall a) was a woman, and b) was dying of breast cancer. Hall had been living as a man for over four decades; even Hall’s adult adopted daughter was not in on the secret. The newspapers had a field day with the story, and New York Republicans accused Tammany of dressing women up as men to vote. Hall died in 1901.

I got this gem from Terry Golway’s delightful book Machine Made. More at Smithsonian.org.