Now that the unemployment rate (at 5.6% in December) is reaching a stage that some economists call “full employment,” most everyone – including many Republicans – are pointing to wage stagnation as the last barrier to economic recovery. So let’s get some facts on the table about what is going on.

Jared Bernstein suggests that wages aren’t going up because there is still some “slack” in the jobs market.

As the pace of job growth has picked up, the labor force has stabilized, and that’s a good sign. But the participation rate is still low and some economists, including me, believe there are significant numbers of people who are not officially in the labor force — they’re neither working nor looking for work — but would come back if decent jobs were available…

So, you want to know why wages aren’t rising yet? It’s because there’s still too much slack in the job market. Yes, there are more jobs, but there are still either too many workers chasing them or waiting in the wings to do so that employers don’t have to bid wages up to get the workforce they need.

He is referring to what economists call the labor force participation rate (LFPR) – the percentage of the population that is 16 or older who are either employed or looking for work. Since the beginning of the Great Recession this number has dropped in the United States from its historical position of 67-68% of the population. The December jobs report listed LFPR at 62.7%.

It is typical for many to assume that this drop is the result of more aging baby boomers and/or people who have become so discourage about finding a job that they’ve given up. Pew Research actually looked into the data on this last October and found something interesting. First of all, its important to note this:

Of that 93%, the biggest increase is in young people in the 16-24 year old age group. Here’s what that has looked like over the last 14 years.

That correlates to an ongoing 60-year increase in the number of young people who are going on to college between graduation from high school and getting a job. As Paul Waldman notes, the number of college grads has increased from 4.6% of 25 year-olds in the 1940’s to 31.7% in the 2010’s. Even more dramatic, the number with less than a high school diploma has dropped from 75.5% to 11.8%.

I would suggest that this change is probably permanent as the number of young people pursuing higher education continues to grow. These young people are less likely to be the workers Bernstein suggests would re-enter the work force if decent jobs were available. 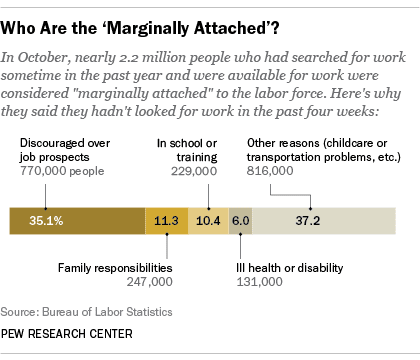 What this tells us is that the likely pool of people who could re-enter the workforce with no other assistance if decent jobs were available is about 770,000. As Pew points out, that is still above pre-recession levels of 400,000 to 500,000. But in an economy that has been averaging over 200,000 jobs added per month, it doesn’t appear to be an insurmountable barrier in the near future.

Recently Shane Ferro highlighted a major issue that is impacting the LFPR but isn’t captured by the data Pew Research produced…the number of Americans with criminal records.

Just how many people does it affect?

The most widely cited estimate is about 65 million people, a little over 20% of the population. That number comes from a National Employment Law Project report from 2011 on this problem…

How much does having a criminal record affect employment prospects? It outright blocks people from being hired for many government jobs.

In the private sector the question is blurrier. An outright ban on hiring people with criminal records is considered to be a violation of Title VII of the Civil Rights Act, according to the Equal Employment Opportunity Commission. Some states are banning asking about a criminal record on an initial employment application. But in practice, there are plenty of ways around that. Employers are allowed to consider a criminal record as part of a larger application.

That increase from 13% of the population in the early 90’s to 20-22% more recently is a direct result of our war on drugs and “get tough on crime” policies that disproportionately affect people of color. And it is likely a huge factor in explaining why the unemployment rate for African Americans has typically been double the rate for whites. From a systemic standpoint, this is where we find the intersection between anti-racism efforts, criminal justice reform and policies to address wage stagnation. What affects one affects all.