At their core, democratic governments are all about conflict resolution. Any form of government “of, by and for the people” is primarily based on methods to resolve our differences.

Over the years, social scientists have articulated various theories and models of conflict resolution that could aid us in examining our democratic processes. But unfortunately, most political commentators simply rely on the white patriarchal assumption that conflict is all about competing for dominance.

For example, a perusal of two models provided to us by social scientists offers clues in understanding President Obama’s style of dealing with conflicts. When it comes to examining our goals in conflict resolution, “the Dual Concern Model assumes that parties’ preferred method of handling conflict is based on two underlying dimensions: assertiveness and empathy.” 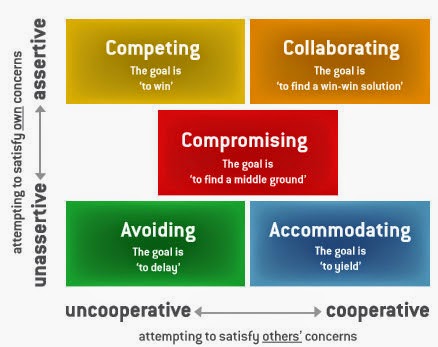 When I suggest that a lot of political pundits are stuck in a white patriarchal understanding of conflict as a means to dominate, that is because our culture is locked in to seeing it only as a competition where the end game is “I win/you lose.” The corollary is that anyone who doesn’t buy into that frame is accommodating – because it is assumed that one cannot be both assertive and cooperative.

And then along comes President Obama saying things like this in his State of the Union:

In the description above, the word empathy is used to describe the extent to which someone approaches conflict with an interest in cooperation. We all know this is an important value for President Obama. He even went so far as to say that it was his obligation to “see the world through George Bush’s eyes.” That’s something that he learned from his mother.

The opposite of empathy is not assertiveness…it is selfishness. Therefore, Obama’s natural preference is to attempt to solve conflicts via collaborating for a win/win solution. But the Republican strategy of obstruction is an attempt to stall any kind of conflict resolution. In other words, it’s a delay tactic that leads to lose/lose. The few times we’ve seen legislation become law in the last four years have been when the two sides found a way to compromise (which is how our founders designed things to work).

The other theory about conflict that I find interesting has less to do with outcomes and more to do with style. Mitchell Hammer developed the Intercultural Conflict Style Model. He posits that the two dimensions that affect the way in which one engages in conflict are: “(1) direct versus indirect approaches for communicating about substantive issues, and (2) emotionally expressive versus emotionally restrained strategies for dealing with emotional upset.” 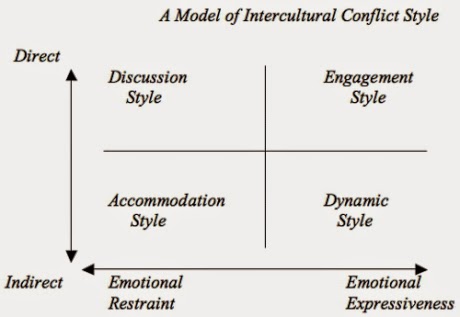 Here’s a classic video from the 2008 campaign of Barack Obama talking about his “discussion style.” If you haven’t watched this before, I highly recommend it as one of the most revealing statements this President has made about himself.

As with any human being, it’s impossible to completely pull apart the threads of how nature or nurture contribute to these preferred styles. But its interesting to note that President Obama spent his formative years in Indonesia, where conflict is viewed very differently.

The JavaÂ­nese, especially the Central Javanese, place an enormous emphasis on self-control. Even to sneeze was to exhibit an untoward lack of self-control, said Michael Dove, who got to know Ann [Dunham] when they were both anthropologists working in Java in the 1980s. “You demonstrate an inner strength by not betraying emotion, not speaking loudly, not moving jerkily,” he said…“Our ambassador said this was where Barack learned to be cool,” Kay told me.

I say all of this not to suggest that President Obama’s style of handling conflict is the right one. That is the wrong metric with which to examine this question. The problem is that a lot of political pundits assume that their own style is the only right one and then proceed to dismiss anything else as weak and ineffective. If you want to judge this President’s performance, its important to know that he prefers to use a discussion style to reach for collaborative solutions. Neither of those bear any resemblance to accommodation.