The next time you pull out your checkbook to pay that hefty tuition bill or pay down your student loan, consider this: there are countries where students pay nothing to attend university. Denmark, Sweden and Germany, all have tuition-free college.

WGBH Radio’s On CampusÂ team wondered how these countries do it, and if there are things the U.S. can learn from their model. Their search to understand how German universities keep costs down and quality up began in the Rhineland.

It was a frigid evening on the banks of the Rhine in the medieval city of Cologne. Under the vaulted ceiling of an old gothic church, the 80-piece university orchestra was tuning up.

In the land of Beethoven and Handel, it makes sense that a university would invest a lot in its orchestra. But that commitment extends far beyond the music program.Â In Germany, one of the world’s wealthiest countries, taxpayers fully subsidize the cost of public higher education.Â

While American students now graduate with an average of nearly $30,000 of debt, college in Germany has always been free.

Over the course of a week, we interviewed dozens of German students. Since tuition is free here, we found they don’t really worry about student loan debt. Instead, they worry about their exams or learning a trade. Seventy percent of the students at the University of Cologne work part-time jobs.

Students, parents, administrators and business leaders of all political stripes told us the same thing: higher education in Germany is seen as a public good. 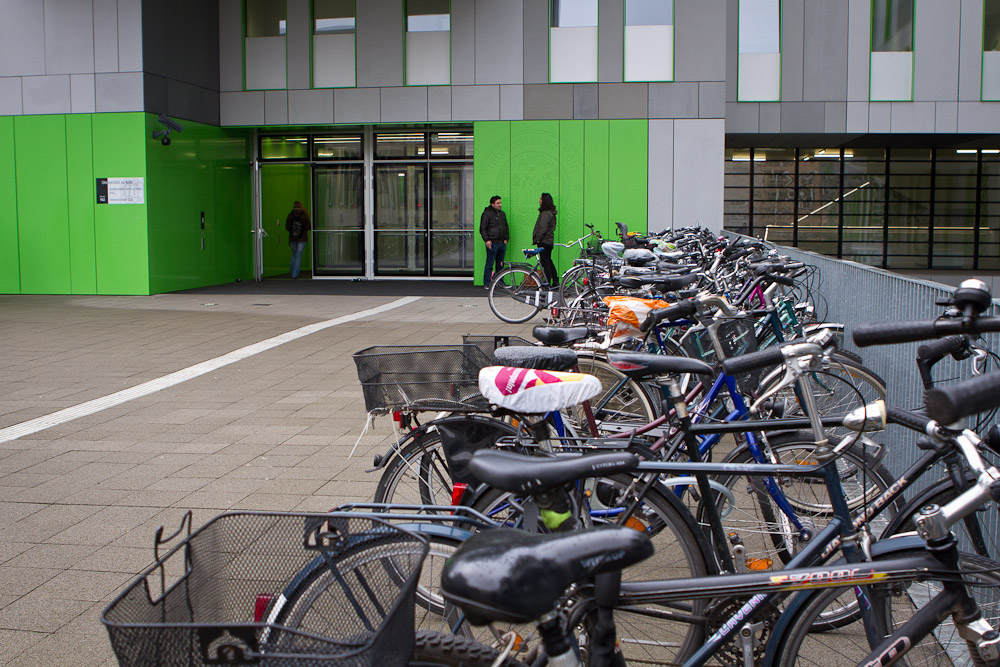 Students and bikes outside one of the University of Cologne’s newest buildings. (Mallory Noe-Payne/WGBH).

The University of Cologne is Germany’s largest university. There are 48,000 students, a medical school and a law school.

“I have to be honest, I really like this university even though it’s not the most beautiful one, as you can see,” said our tour guide Valerija Schwarz, a Ph.D. student in German Literature. 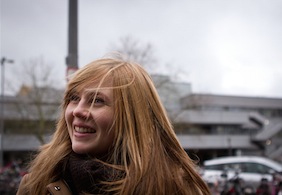 On the morning we visited, the university’s central square swarmed with bicycles. Many students bike to school or take public transportation, Schwartz explained. That’s why there’s no big parking garage.

Students in Germany also tend to stay local, so there aren’t any dorms. There’s no active student clubs, or big football stadium. And every lecture hall we poked our heads in was huge.

“Most of the time you don’t even know who is sitting next to you or who your professor is,” Schwarz said. “You just listen and then reproduce your knowledge during the exams.”

Related: Is Student Loan Debt Really Dragging Down the Economy?

All of this translates to savings: the average cost of an undergraduate degree in Germany is $32,000, paid for by the state. In the U.S., some schools charge that much for one year, and student loan debt has surpassed $1.2 trillion.Â

One hundred and sixty miles south of The University of Cologne, tucked in the heart of Heidelberg’s quaint but vibrant city center, the University of Heidelberg offers a full program of courses from ancient history to biochemistry. It is one of Germany’s oldest and most prestigious institutions. 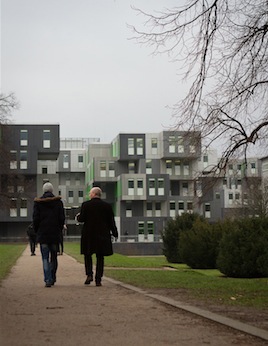 “A majority of German voters agree that a decent start in life includes the possibility of a free higher education,” said Frieder Wolf, a political science professor here.

“This is not to complain. I love my job and I have a lot of freedom but this is how we keep costs down – larger classrooms,” Wolf said. “We’ve got courses with 40 participants, 50 participants in the social sciences, where [American universities] might have tutorials of four or five students.”

And unlike their American counterparts, German universities have very little administrative bloat.

“Many administrative tasks for which you would have specialized personnel in the States is done by the teachers and professors here,” said Wolf.

But are German students getting the same quality learning experience?Â

Germany isn’t known for having top-tierÂ colleges like Harvard, Yale and Princeton. But, said Professor Wolf, what it does have is “reliable quality.”

“With all due respect, [America has] the best colleges but [it also has] some of the worst,” Wolf said. “There’s probably a new sort of class divide between people who get there and who don’t get there, where as in Germany basically most everybody who wants to go to an average college can go there and get a decent education.”

In the U.S., the closest comparison to Germany’s no-frills, low-cost higher education is probably state and community colleges. President Obama has proposed making two years of community college tuition-free for students who keep their grades up, but Republican leaders have already said the plan will go nowhere in Congress.

“It’s a very big commitment,” said Sandy Baum, a higher education economist with the Urban Institute. “People want it to be free but they don’t really mean they want to pay higher taxes to make it free.”

Baum said Americans also don’t want to give up the residential college experience, with all its bells and whistles. But, she said, the U.S. needs more affordable choices.

“In many European universities, you go and you listen to a lecture and that is what is involved in the university,” Baum said. “It’s a lot cheaper to do that than the many things that people are asking for on college campuses here. And people are voting with their feet and we need to have multiple options.”

Baum said those options should include more online learning and apprenticeships.

Willing to pay, despite free tuition 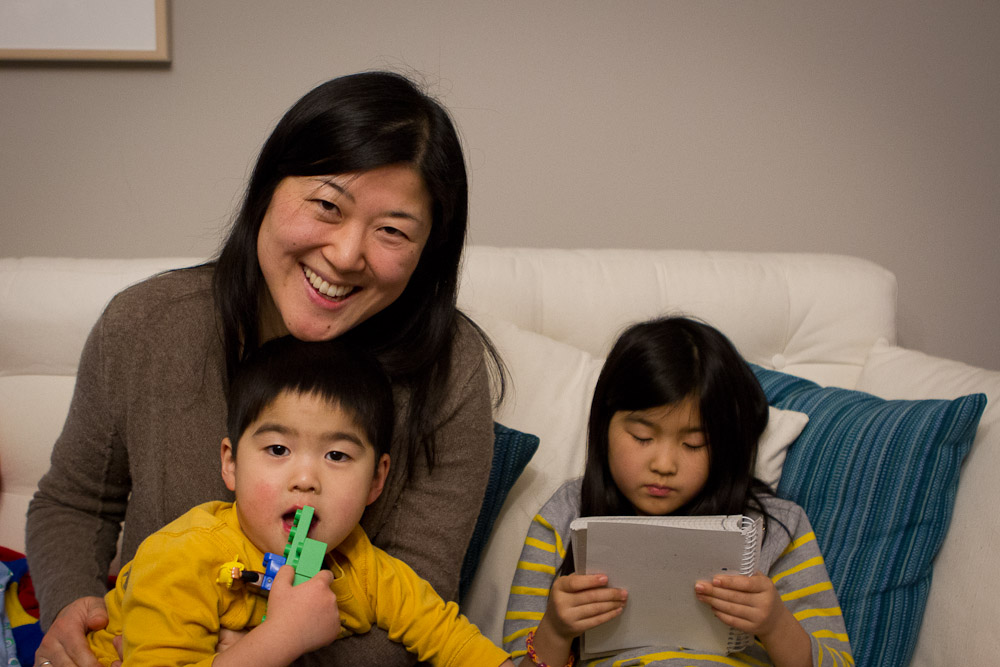 Jane Park and two of her three children in their home in Essen, Germany. (Mallory Noe-Payne/WGBH).Â

Still, we found German families who, despite the promise of free college, are willing to pay for the elite American experience.

JohannesÂ Kim and Jane Park live in Essen, a neighboring city 50 miles north of Cologne. We visited their family on a weekday night. In the kitchen, as Park prepared dinner, their three small children were listening to an opera lesson on tape.

Kim graduated from the University of Heidelberg and he thinks the opportunity to build relationships with professors is something you really can’t put a price tag on. He wants their kids to attend schools with strong brand recognition. 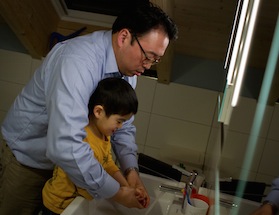 “The American college experience is something that instills some sort of emotional bond to your university. That is something that is completely missing from the German system,” Kim said. “Although I went to the oldest university in Germany, there is not the feeling that I’m a proud alumni or graduate of that school.”

“I like to think that I have a strong sense of social justice and great education is almost reserved for the elite despite scholarship opportunities and financial aid,” Park said. “That, I find disturbing and in some ways I am squaring, ‘OK, do I want to feed my children into that sort of system?’”

Their kids are young, so it will be awhile before they go to college. And by that time, there’s no guarantee that Germany will still be committed to the idea of free college education.

German states are on a five-year deadline to balance their budgets, meaning states, and taxpayers, will be taking a close look at what they can afford.

This is part one in our ongoing series that examines higher education in Germany, and compares it to the challenges we face here in the U.S.Â

To see the rest of the stories visitÂ German Lessons: What the U.S. Can Learn About Education From Germany