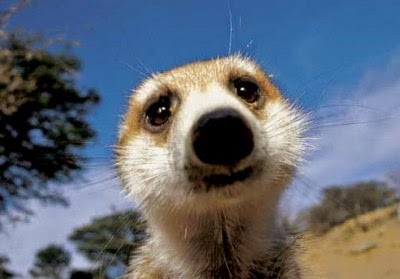 There’s a chance this post is just an excuse to show a cute picture of a meerkat.

My news feed is breathlessly telling me about Meerkat, the new social media platform touted at SXSW that makes it really easy to livestream video from your phone to Twitter. I’m told it’s a game changer, which is cool, because this game has gone several days without being changed.

I’m generally cynical about the potential of social media to completely change the nature of politics. Parties still need to mobilize voters and manage coalitions. But even a skeptic can’t deny that radio and television, cable news and the Internet, Facebook and Twitter have all had effects. Not always the ones people expected, but effects.

People seem to be expecting that Meerkat, like other social media, will have a democratizing effect on politics. If every citizen is a journalist, if every gaffe is live-streamed, then politicians will have nowhere to hide. As former Obama advisor Dan Pfeiffer puts it here “This year’s “47 Percent Moment” will be on live video. … This is a good thing, … because it breaks down barriers between the voters and campaigns.”

Maybe so. But politicians are strategic. They may not be able to outsmart technology, but they will try. At at least some will succeed.

What would that look like? One possibility is that politics will become more sterile, as Matt Yglesias argued after Obama was criticized for using the word “random” to describe an attack on a kosher deli in Paris. For fear of an unguarded comment, all comments will be guarded. To take another deep cut from John Zaller‘s A Theory of Media Politics, politicians who wanted to control their message thirty years ago would orchestrate “closed photo ops,” in which they limited journalist access. If every citizen is a journalist, then everyone’s access may be controlled.

There is another way that can happen. Recall that the “47 percent” comment (see also “cling to guns or religion”) was meant for a semi-private audience, at a fund raiser. Romney’s comments were surreptitiously recorded. As it becomes harder and harder for politicians to control their semi-private events, important discussions of policy may move into still more private places.

I don’t know how the latest round will play out. Meerkat is hardly the first technology that makes it easier to spread unfiltered political information. But whatever the effect, it won’t just be the result of journalists and voters using the technology. It will also involve politicians responding to it.