Recently Pew Research published a report on presidential approval ratings from Eisenhower to Obama. It didn’t get much attention, but I think it contains some fascinating information. Here’s the graph that really stands out.

What we see is that Obama’s approval rating has varied less than any other president going back to the mid 1950’s. But it’s even more dramatic than that. Take a look at Pew’s most recent graph of the President’s approval rating since he was inaugurated in 2009. 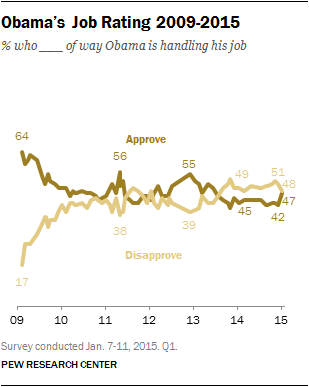 If you eliminate the “honeymoon period” of his first year in office, you trim another 8 points from that spread and it varies even less. Keep that in mind the next time you hear a politician or pundit try to draw major conclusions about a tick up or down of a few points.

To further illustrate how this compares with previous presidents, Pew provides this graph showing the variation of approval ratings from Democrats and Republicans. 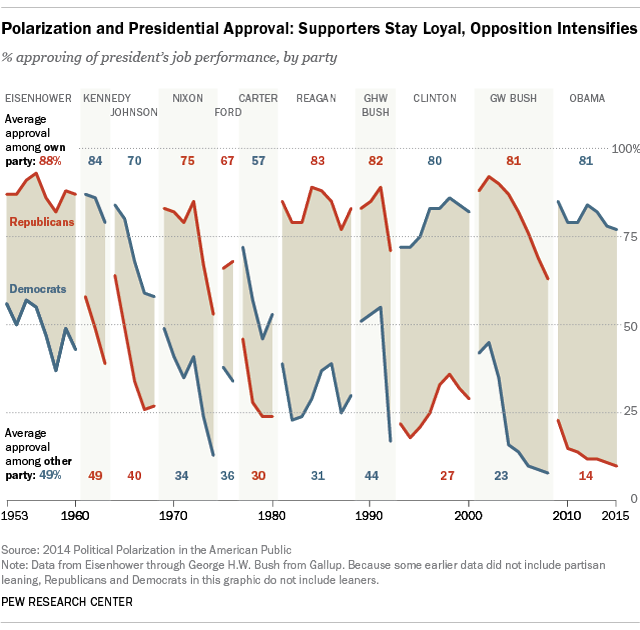 It is clear that – except for a blip during the presidency of George H.W. Bush – average approval from members of the opposing party has been dropping. In other words, we have become more polarized along party lines.

But it goes even deeper than that. Democratic approval of George W. Bush started off fairly high and initially went up. I’m sure that was in the immediate aftermath of 9/11. As his presidency proceeded, his approval not only dropped among Democrats, the decline was mirrored by a drop in approval amongst Republicans.

Similarly, we see a rise in Republican and Democratic support for Bill Clinton and a lot of variation from both groups in approval for Reagan over his 2 terms. As with Bush and 9/11, I’m sure those swings could be tied to specific events.

And yet, no matter what President Obama has accomplished at home or abroad (i.e., killing Osama bin Laden, improving economy, etc), his approval ratings with Republicans are not affected – and actually continue to decline (while his approval from Democrats remains fairly steady).

If it is true that in the past, shared events affected both Democratic and Republican views of our president, that no longer seems to be the case. Beyond a more polarized electorate, that is likely the result of a more polarized media and its contribution to epistemic closure.

One of the more striking features of the contemporary conservative movement is the extent to which it has been moving toward epistemic closure. Reality is defined by a multimedia array of interconnected and cross promoting conservative blogs, radio programs, magazines, and of course, Fox News. Whatever conflicts with that reality can be dismissed out of hand because it comes from the liberal media, and is therefore ipso facto not to be trusted.

These days, shared events are immediately met with attempts by the right wing media to find a way to blame President Obama. Therefore, when it comes to a challenge like ISIS, rather than unite against a common opponent (as we did after 9/11), it becomes proof for conservatives of this President’s incompetence (or, worse yet, culpability).

That is likely the kind of world we’re going to be living in for a while. It’s reflection in presidential approval ratings is just one sign of a bigger problem.