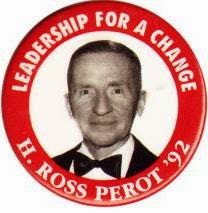 Taegan Goddard has effectively trolled the political science community today by contributing to the dangerous election genre of “third party/independent voter magic.” Lots of other political science bloggers here and elsewhere have already critiqued these claims on their empirical and philosophical merits. But Goddard’s arguments are hardly alone, and they have a long history in American politics.

Despite many clear arguments about the importance of political parties and partisanship in democracy, pundits – and many Americans – continue to come back to criticisms of parties as the problems that ail democracy. This is not productive or fair, but it is perennial. It’s not a big mystery why parties would be attractive targets in our current environment. Legislative gridlock and interpersonal animosity over politics are two phenomena that seem both pervasive and dysfunctional, and both are attributed to polarization. But anti-party sentiment isn’t unique to this era. The first recurrent critique is not aimed exactly at parties in general, but rather stresses that the parties we have are inadequate, in this case because of the way that they “bundle” issues. The second critique can be either specific to a particular set of parties, or a general critique of parties, which is that they are undemocratic. In this case, Goddard claims that our current parties don’t give voters enough choice.

Powerful political movements in the past have embraced these critiques. Ross Perot took on the “our current parties suck” idea and used it to introduce deficits into the political discussion and to make what many found a compelling argument about “radical centrism.” In other words, Perot was an important, if strange, voice in the 1992 election and ended up winning almost twenty percent of the vote. He didn’t do as well in 1996, but still managed to capture more than eight percent, a decent showing for a third party candidate. What happened to Perot’s “reform” movement after is instructive – like most movements that are oriented around a candidate rather than an organization, it disintegrated.

Woodrow Wilson and other Progressives (in both parties) took up the idea that the machine-driven patronage system was undemocratic. These are the folks who brought us the primary and direct democracy. Given the opportunity, Wilson might have changed parties even more – he disliked the way that American parties functioned, but thought that more program-driven, “responsible” parties were good for democracy (see this and this). In other words, his vision for party democracy was a lot like what we see now, especially on the Republican side.

These were two potent critiques, and they had repercussions that go beyond these two particular figures. Perot’s candidacy was possible because of decades (or more) of anti-party ideas. American political parties, which were once robust (and yes, highly imperfect) organizations, have become more candidate-centric and also more platform-oriented. The latter isn’t all bad, despite some incompatibilities with the Madisonian system. But using candidates and ideas, rather than organization, as the main currency for parties, has implications for two of the core functions that parties perform in a democracy.

The first is that parties cultivate potential office-holders. The Democratic Party, which has proven more vulnerable to the candidate-centric model is especially suffering from this. There are a bunch of different reasons, but the fact that most of the possible candidates for 2016 are over 60 is pretty telling. And there’s this – a story today about how Hillary Clinton has promised to help revitalize state and local party organizations that languished during the Obama years.

In addition to building up a “farm team,” having a dense party network of ambitious elites is a useful counterweight to the power of the presidency. Before the passage of the 22nd amendment, ambitious elites enforced the informal norm against third terms. When FDR, after building up the Democratic Party in a personalistic way, violated this norm, a coalition finally came together to codify term limits in the Constitution. And while FDR did a lot to expand the party’s coalition and strength, the Democrats floundered without much leadership in the 1950s, following 20 years of FDR and Truman.

The second democratic (small-d) function of parties is to engage citizens in politics. Why aren’t more people – and more people on the lower rungs of the socioeconomic ladder – involved in politics, or at least casting votes? Increasingly, it seems that the answers to this lie with mobilization, feelings of efficacy, and civic engagement. The Obama campaign, in its candidate-centric way, brought this back in the form of “ground game.” But in general, this kind of approach is at odds with the ways that politics has evolved – around big personalities, professional campaigns (the capital intensive rather than labor intensive model) and with national rather than local campaign strategies.

So maybe Goddard and other critics are right about something – maybe the parties we have do suck. They’ve fallen short of their charge to engage the public. The Democrats have done poorly at cultivating local organizations. The Republicans have become rigidly bound to their ideology at the expense of building a bigger tent. Luckily, we don’t have to look very far for the culprits. We can trace these defects right back to anti-party reforms.