A common concern voiced by many older people with regard to the high education debt held by many Americans is that perhaps all of these students are just expecting things to be too damn easy. College is supposed to be something of a struggle, right?

In 2012 North Carolina’s wackjob national politician, Rep. Virginia Foxx, said that she worked her way through college and so she had “very little tolerance for people who tell me that they graduate with… $80,000 of debt because there’s no reason for that. You don’t sit on your butt and have it dumped in your lap.”

Well OK, but tuition at Foxx’s alma mater, the University of North Carolina, was about $223 a year when she went there.

That’s the problem with so much of this narrative, according to this piece at the Atlantic:

Work ethic isn’t the limiting factor. The economic cards are stacked such that today’s average college student, without support from financial aid and family resources… would require superhuman endurance, or maybe a time machine.

That’s because all public colleges in America have become way too expensive for people to pay for working a normal job, the kind one can have while taking courses. The author looked at Michigan State University, a typical public college:

In 1979, when the minimum wage was $2.90, a hard-working student with a minimum-wage job could earn enough in one day (8.44 hours) to pay for one academic credit hour. If a standard course load for one semester consisted of maybe 12 credit hours, the semester’s tuition could be covered by just over two weeks of full-time minimum wage work—or a month of part-time work. A summer spent scooping ice cream or flipping burgers could pay for an MSU education.

That’s no longer true. The increase in the minimum wage did not keep up with the increase in state university tuition. In fact, it hasn’t been true for 20 years. As the article explains, back in 1993,

A single MSU credit hour became worth more than 20 hours of wages. Imagine a 15-week semester with a course load of 12 credit hours. If each credit hour required 20 hours of minimum wage work, a student would have to work 16 hours a week to pay for school.

That’s doable. But today the same student would have to work 48 hours a week at that minimum wage job to pay for his classes.

That’s right: 48 hours a week. Students can’t work their way through college anymore. The author has provided this graph of what has changed here. 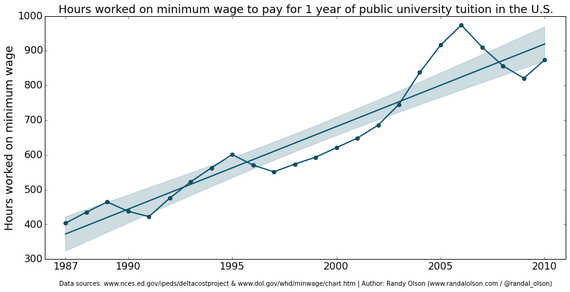 It used to be possible to pay all of this with a summer job. Those days are gone.

As the author points out, this is actually a rather limited analysis of the situation. It considers only tuition, and the other costs of college, room and board, mandatory fees, really add up.

This is a function of two things. The first, as readers of this blog are no doubt well aware, is the vast increase in the cost of state university tuition over the last 40 years. The second is just the low minimum wage in this country.

Minimum wage isn’t designed to pay college tuition, of course. It isn’t tracked to tuition. But the growth rates of these two numbers (the slow growth of minimum wage relative to the rapid escalation of college costs) indicate something interesting about college costs today: it’s not really designed to be affordable for the working class anymore.

People like Foxx are wrong. A working class job just doesn’t make college available. College is supposed to be hard, but it’s not supposed to be impossible.