Last year I wrote about how my otherwise good-hearted grandmother, who grew up in Kentucky, learned to be racist. While I can’t particularly point to this textbook, I’m sure she was taught what we now call scientific racism in school. 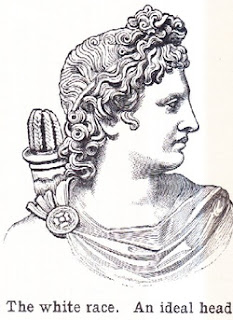 According to this textbook, the white race is the most advanced in the world. Most other races, schoolchildren were taught, tended to have a “savage” character, living in remote areas without industry and Western-style education.

A few months ago, as we approached the 150th anniversary of the end of the Civil War and the beginning of the period of “reconstruction” in the South, I found this prophetic poem by Charles Dinkins:

When fails the sword, the better way
Becomes the soldier’s part to play;
The south will whip the north some day
With ink and pen.

That poem captured what I was taught as a child about reconstruction and the particular brand of racism that I learned growing up mostly in Texas. Will Moredock, who was raised in South Carolina and obviously has a better memory of the specifics he learned from textbooks like The History of South Carolina by Molly C. Simms Oliphant, explains it better than I could.

It was not until I was an undergraduate at the University of Georgia several years later that I began to discover that almost everything I had learned in the first 18 years of my life was a lie. One of my first discoveries was African-American history. Until that time I had been taught that black people had been brought here from Africa, they had been slaves, and then … then … nothing! They had no history, no culture, no identity. The black people I saw on the streets and in the stores of my small South Carolina town every day were ciphers, as alien to my young eyes as creatures from another planet.

At UGA, I discovered John Hope Franklin, Langston Hughes, W.E.B. Dubois, and Zora Neale Hurston. Learning that black people actually had a history and a culture was like discovering a secret, invisible nation hiding right here in our midst, should-to-shoulder with the white nation I had inhabited so blithely. It was a nation with its own history and heroes, its leaders and martyrs, its writers and artists, most of whom I had never heard of. I had never known that African Americans served in every American war, built the transcontinental railroad, journeyed to the Pacific Ocean with Lewis and Clark and to the North Pole with Robert Peary. I had not heard these stories because my teachers and school administrators, the white men who ran my state and who ran my church, even my own parents, did not want me to know about them. Perhaps most importantly, Mary C. Simms Oliphant did not want me to know them.

I say all that because I think its way past time for white Americans to do some soul-searching about how a young man like Dylann Storm Roof learned to hate. 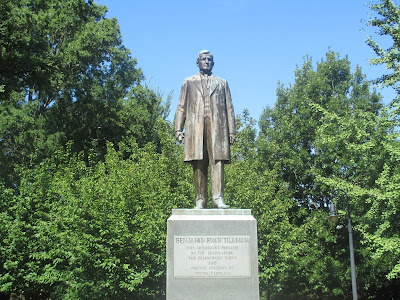 Moredock gives us just one example of what Roof was taught in his hometown of Columbia, SC. On the state capitol grounds is a statue of Benjamin Tillman with an inscription that describes his “life of service and achievement … In the home loving and loyal, to the state steadfast and true for the nation.” That’s a lie.

Ben Tillman’s long and bloody public career began in 1876 at what would ultimately be called the Hamburg Massacre.

The then 29-year-old Tillman led the members of the Sweetwater Sabre Club, a.k.a. the Edgefield Redshits, against a local militia group, all black. Several African-American militia men were killed in a pitched battle with red-shirt-wearing white terrorists. After the militia surrendered, five of them were called out by name and executed. A few weeks later, when vigilantes captured a black state senator named Simon Coker, Tillman was present when two of his men executed the prisoner while he was on his knees praying.

Later, the terrorist leader Tillman explained his intentions on that fateful July 8 day: “It had been the settled purpose of the leading white men of Edgefield to seize the first opportunity that the Negroes might offer them to provoke a riot and teach the negroes a lesson; as it was generally believed that nothing but bloodshed and a good deal of it could answer the purpose of redeeming the state from Negro and carpetbag rule.” In a 1909 speech at a Red Shirt reunion in Anderson, Tillman reiterated this point, noting that he believed in “terrorizing the Negroes at the first opportunity by letting them provoke trouble and then having the whites demonstrate their superiority by killing as many of them as was justifiable.”

He added, “That we have good government now is due entirely to the fact that Red Shirt men of 1876 did all and dared all that was necessary to rescue South Carolina from the rule of the alien, the traitor, and the semi-barbarous negroes.”

As long as a state capitol contains a monument revering a man who was a terrorist, the insurgency lives on. Let me say that one more time so that it really sinks in: this statue of terrorist Ben Tillman stands on the grounds of the SC state capitol right next to where the Confederate flag still flies.

As long as that’s true, we will continue to teach our children to hate. Because children will listen.