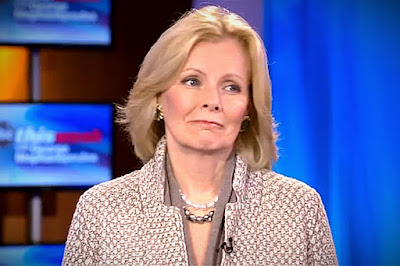 I have to admit that no one on the right intrigues me more than Peggy Noonan. It might be because she is the most prominent female conservative pundit. But it also has to do with her unique skill at pearl-clutching. She is absolutely the queen of that venue.

Exhibit A would be her recent column in the WSJ about the Supreme Court’s decision on marriage equality. Peggy’s big concern is that it wasn’t a unanimous decision.

Unanimous decisions tend to quell dissent; they confer an air of inarguable legitimacy, even inevitability. Whatever your own views, you as a citizen must acknowledge that nine lawyers, presumably skilled interpreters of the Constitution who hold different judicial and political philosophies, were able to agree on the charged issue at hand. Unanimous decisions rob opponents of arguments.

Landmark decisions based on narrow splits reflect a continuing breach.

With that, Noonan never has to specifically say that she disagrees with marriage equality – or that the Court was wrong. She simply clutches her pearls and worries about the “continuing breach” created by those who disagree with the likes of Scalia and Thomas.

(Shhh…no one tell Noonan that Bush v Gore – which one could argue was the most momentous “landmark” decision in my lifetime – was definitely NOT unanimous.)

Of course Noonan hasn’t reserved her pearl-clutching for Supreme Court decisions. She regularly employs it in defense of Congressional Republicans as well. The problem, you see, is never the fact that Republicans are embracing extremist positions and – even more importantly – a strategy of total obstruction. You can always count on Noonan coming up behind them to worry about how sad it is for the country that Democrats won’t play ball with them.

So whenever I see Peggy clutching her pearls, I know that her job is to attempt to give the obstructionists legitimacy. Never mind that the folks she is defending can hardly utter the word “compromise.” It’s just such a damn shame we’re so divided (because of those mean liberals). Oh, my!