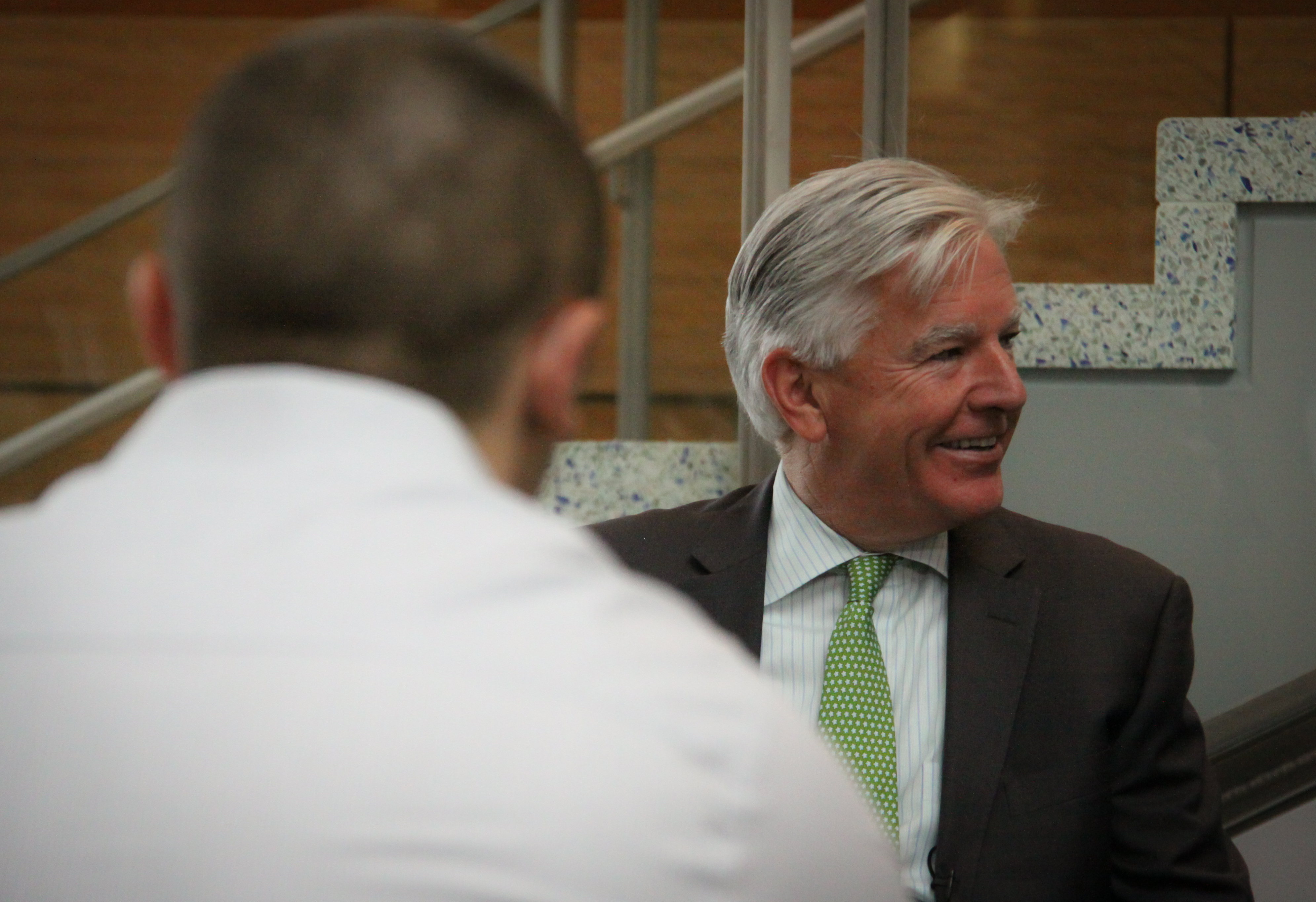 Marty Meehan, the new president of the UMass system, spent his first day talking to students at the University of Massachusetts Boston. (Kirk Carapezza/WGBH).Â

Wednesday marked former Congressman Marty Meehan’s first day on the job as president of the University of Massachusetts. He’s the system’s 27th president, but its first graduate to lead the university.

Meehan spent his first day on the job meeting with students. The day was choreographed, like the rollout of a slick product. Inside UMass Boston’s sleek new $114-million-dollar science complex, Meehan and Chancellor Keith Motley conducted a roundtable discussion with 16 students.

Meehan tried to show students that he understands where they’re coming from, stressing his working-class roots growing up in Lowell.

“Nine of us lived in the house and there was only one bathroom. You can imagine what it was like getting up in the morning with nine people trying to use the bathroom,” Meehan laughed. “But I believe this university gave whatever the skills, whatever the education I needed, to achieve my full potential, which is why I feel so passionate about this institution.”

Meehan said increasing access for low-income students will be among his top priorities. But, after a 5 percent tuition increase was recently approved by the university’s Board of Trustees, some of the students here say they are worried about taking on too much loan debt. Meehan promised to keep costs down.

“Affordability is really important and so is quality,” Meehan said. “I see UMass as high-quality institution, and I want to keep it high-quality.”

Meehan said he decided to begin his tenure visiting UMass Boston because of its diversity among students and faculty.

“I often time look at the lack of diversity of the faculty at colleges and universities across Massachusetts, throughout New England, and every time I read a study I see UMass Boston ranking among the tops. That’s what UMass is supposed to be all about,” said Meehan.

Students, like senior Yen Phan, urged Meehan to more closely integrate the entire UMass system. The 21-year-old from Dorchester asked Meehan how, as president, he plans to make all five campuses come together to create a better system overall.

“I think that collaborating among the campuses represents our biggest strength, and I’m gonna look for ways to do that even more,” answered Meehan.

After the event, Phan pointed out that Meehan didn’t fully answer her question.

“I think it was a really good answer, but I think I was looking for something along the lines of creating something so students and faculty could interact with each other,” said Phan.

Phan suggested a program where UMass students from across the state could meet on the Dorchester campus.

“Maybe take a class and interact, like having dorms at UMass Boston,” Phan said. “They can spend a month, two months, doing research in biology or business finance.”

Still, Phan said she appreciates having a new president who’s a UMass graduate.

“It’s great because he knows what it’s like to be one of the students from the UMass system,” said Phan.

Meehan clearly has his work cut out for him. His renewed focus on affordability and access comes as state funding for UMass has dropped 25 percent over the past 15 years.

[Cross-posted at On Campus: the WGBH Higher Education Blog]