The way Americans often talk about college, at least those of us from the upper middle class looking at college when we’re in high school, has to do with the idea of opening up our amazing potential for new ideas. It’s the first time in life when you can do whatever you want, find yourself, and study the subject that appeals to you based on your totally diverse interests.

According to this piece at the Atlantic:

Kim Weeden, a sociologist at Cornell, looked at National Center for Education Statistics data… and her analysis revealed that, yes, the amount of money a college student’s parents make does correlate with what that person studies. Kids from lower-income families tend toward “useful” majors, such as computer science, math, and physics. Those whose parents make more money flock to history, English, and performing arts. 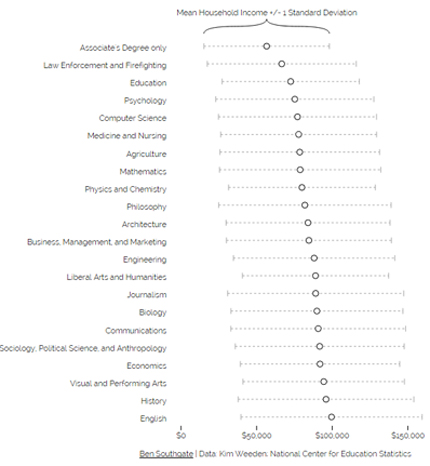 Part of the reason for this, according to the article, has to do with where these students go to college.

Another trend expressed in the data, Weeden notes, is that lower-income families and higher-income families tend to send their children to schools with different options for majors: Most of the priciest, top-tier schools don’t offer Law Enforcement as a major, for instance. There is also the possibility that children from higher-income families were more exposed to the sorts of art, music, and literature that colleges deem worthy of study, an exposure that might inspire them to pursue those subjects when they get to college.

I have some questions about how this works out at different types of institutions, for sure. While it’s true that law enforcement and criminal justice aren’t offered at Princeton, English certainly is offered at City College of New York. Within schools do the richer students tend to major in those things at the bottom of the chart, or is this only true across all students nationally?

Another interesting thing about this chart is that while it certainly reflects what choices rich kids make, it doesn’t seem to have much to do with the sort of majors that make someone rich. The common go-to major for people who want to make money, after all is something like “business, management and marketing.” But look where that appears on the chart. It’s right in the middle. That’s not , it seems, generally the major actual rich kids pick.