Over this past week, President Obama gave us a trifecta on the issue of criminal justice reform. First of all, he commuted the sentences of 46 prisoners who were serving long sentences (14 of whom were sentenced to life) for non-violent drug offenses.

That makes this President’s total number of commutations (89) more than the previous four presidents combined. As I’ve pointed out previously, that number will continue to grow over the next 18 months.

Next, President Obama addressed the NAACP’s annual convention in Philadelphia and proposed his ideas for criminal justice reform:

On that last point, the President made a stark comparison:

Finally, Obama became the first president to ever visit a federal prison. 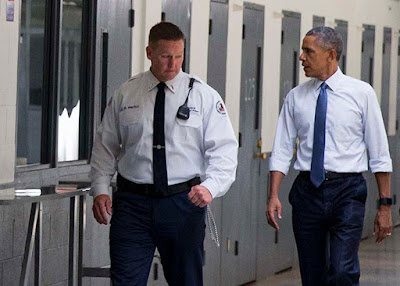 After meeting with 6 inmates at the El Reno Federal Correctional Institution in Oklahoma, the President made an extraordinary statement:

And I think we have a tendency sometimes to almost take for granted or think it’s normal that so many young people end up in our criminal justice system. It’s not normal. It’s not what happens in other countries.

What is normal is teenagers doing stupid things. What is normal is young people making mistakes. And we’ve got to be able to distinguish between dangerous individuals who need to be incapacitated and incarcerated versus young people who, in an environment in which they are adapting but if given different opportunities, a different vision of life, could be thriving the way we are.

That’s what strikes me — there but for the grace of God. And that I think is something that we all have to think about.

As President Obama goes “all-in” on criminal justice reform, it will be interesting to watch the reaction of Republicans. As we’ve seen recently, many (especially at the state and local level) have signed on to the need for these kinds of reforms. In years past, their strategy of total obstruction would mean that it was now time to oppose them. Will it play out any differently on this one?