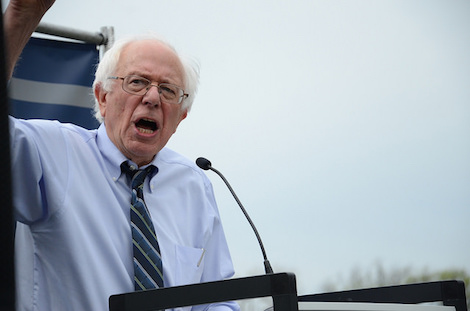 On Saturday, at a Netroots Nation town hall, two elements of the ideological left got into a fight.

While Democratic presidential candidates Martin O’Malley and Bernie Sanders attended the town hall, angling for the support of the ideological progressive elements of the Democratic Party, protesters from the Black Lives Matter movement took over the stage to press their central issue, fighting racism, especially police brutality and its disproportional impact on people of color.

It’s not often that you see an academic thesis come to life in a compact little drama like this, but the events closely match the argument I made in my book on ideology (h/t to Kevin Collins for seeing the connection and asking me to comment.) There, I argued two things. First, ideologies are coalitions of interests. Second, their adherents try to influence parties

Some people want economic justice. Some people want racial justice. What ideologies do is tie these things together. Left ideologues want them both. But even ideologues usually want one more than the other, and so they will disagree over priorities. That’s what is happening here.

As this nice Dara Lind analysis of the event argues, what Black Lives Matter wants is to make racial equality an bigger part of the progressive cause. Racial inequality isn’t over, and it’s not just an echo of economic inequality. I doubt most white liberals would argue with that. (Just today, it was white liberals who I saw sharing this viral video on the enduring consequences of race.) But it probably isn’t police violence that is pushing white liberals to Sanders rallies. It’s Citizens United and health insurance and student debt. White liberals are, well, white. They don’t have the daily reminders of racism that black activists have.

What I think is telling about the coverage of this has been the near universal characterization of O’Malley and Sanders as potentially out of touch. No one is saying Black Lives Matter has no argument. This may be because Hillary Clinton supporters want to score points against Sanders, but I think that even Sanders supporters concede that BLM has a point. The Sanders activists who are defending him are arguing that he’s really on their side. They aren’t saying they are wrong to care about their issue, they are saying that Sanders marched with Martin Luther King. They don’t want to defeat the racial justice activists. They want them to join.

For their part, the BLM activists used a labor song in their initial protest, and their claim was that they wanted to hear O’Malley and Sanders say what they hope they really believe. They too, want to shape the ideology, and they are doing it by going to their most likely allies, the progressives who like Sanders.

These, too, are cleavages. These cleavages that was so significant in the 1950s that William F. Buckley explicitly created fusionism as an effort to bridge the different strands of conservatism. His effort has been successful, but the divisions are still there.

The Black Lives Matter movement may be able to mark this one a success. O’Malley has apologized for responding with “all lives matter,” a phrase that probably meant well, but misses the point about black lives being undervalued. And Sanders has tweeted in support of the BLM position. As Roderick Morrow, the activist who started the #BernieSoBlack hashtag, puts it in this Daily Beast piece: “Well, he’s listening and paying attention. The last thing I want for any candidate is for them to give up on the black vote, because that would be the most destructive. Criticism is just part of the job.”

It’s part of the job in shaping ideology, and in making parties ideological.