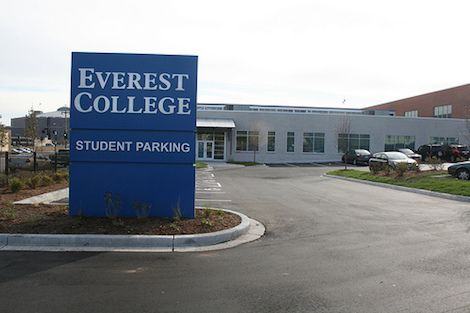 Pundits have criticized for-profit colleges for years for offering a false promise to the American working class: go take out some loans to attend a college offering classes on “your own time,” and then get a good job in a career you always wanted. But it often doesn’t really work out like that. People tell stories about huge debts and no job prospects.

So do for-profit colleges work for students?

Actually it turns out the answer might be yes. Because there really is an earnings bump from going to a for-profit college. According to an interesting Brookings study that came out recently:

After carefully controlling for student background characteristics (including unobservable characteristics like ability and motivation), we find that for-profit students who work both before and after attending experience a bump in earnings around four percent per year of education—or 10 percent total (since a typical associate’s degree take 2.6 years to complete)—relative to high school graduates who do not attend college. The annual earnings gain increases to seven percent when we add in the slightly higher probability of being employed post-education. We find suggestive evidence that students who drop out of for-profit programs see virtually no return and those who complete their associate’s degrees have higher returns—around eight percent per year.

It’s not as impressive a gain as what happens when one attends a real college, however.

Still, these numbers are quite a bit smaller than the returns found in other sectors (upwards of 12 percent per year for community college associate’s degree students) and suggest that many for-profit students would fare better in public community colleges, where earnings gains may be higher and tuition is less than a quarter of the price.

But that’s actually pretty interesting and indicates that for-profit colleges might really deliver some value to the careers of their graduates. But that’s not the whole story.

That 10 percent earnings increase, after all, indicates only that for-profit college is not a waste of time. They also cost money to attend. And that’s where the information gets pretty weird.

For-profit associate’s degree students need at least an 8.5 percent annual earnings gain to cover the cost of tuition, foregone earnings, and debt service at a typical for-profit college. Our estimates fall short of this threshold, suggesting that for the average student, the earnings gains are too low to justify the cost and generate a positive return on investment. It also suggests that many students may not have full or accurate information on the earnings gains that they can expect post-college.

They’re just too expensive to students to be worth it. While it’s clear here that the degrees aren’t, on the whole, entirely garbage, it also seems students aren’t really making great financial decisions when they sign up for these institutions.

Note here that this does not appear to be a comprehensive study. A similar look at earnings relative to cost might well indicate that obtaining, say, a $180,000 degree in studio art from Wellesley doesn’t “justify the cost and generate a positive return on investment.”

The difference, however, is that the students who attend a school like Wellesley mostly have the cost of their educations funded by institutional grants or their own affluent parents. They’re not taking out painful loans to try and get better jobs.