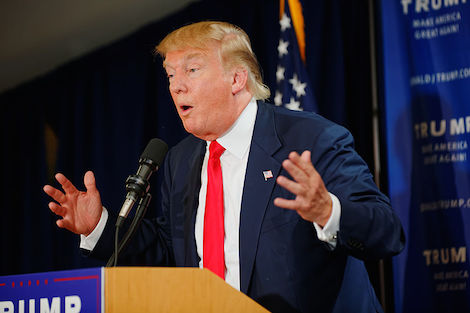 When I opened my favorite news aggregator this morning, nine of the top ten items were about Donald Trump. That’s right: 90% of the top stories involved the bloviating real estate tycoon and reality TV star.

No, I’m not going to write 90% of my 12 posts today on The Donald, but as someone whose job is at least partially to inform readers of what others are talking about, I can’t ignore him, either.

Still, whereas the big question at the beginning of the week was whether Trump’s suddenly high standing in early horse-race polls of the Republican nomination contest could survive his criticism of John McCain’s war record, now we have to wonder how long he can succeed in blotting out the sky with “controversial remarks” that feed his publicity machine.

Unless fresh polls show his support collapsing, or he suddenly attacks Jesus Christ or U.S. troops in the field, it’s probably inevitable that Trump-o-mania will last at least until the August 6 GOP presidential debate, where the debate within the debate will be about Trump’s interaction with other candidates and his relative ability to overshadow the proceedings. Beyond that, his perpetual trump card–yeah, pun intended–is going to be his ability at any moment to strike terror into the heart of Republicans by hinting at an independent candidacy that could threaten the soft white working class underbelly of the GOP base.

Trump knows this, of course, and so he is already establishing a standard for deciding on an indie run that is infinitely flexible, per this report from The Hill’s Cirilli and Cusack:

Pressed on whether he would run as a third-party candidate if he fails to clinch the GOP nomination, Trump said that “so many people want me to, if I don’t win.”

“I’ll have to see how I’m being treated by the Republicans,” Trump said. “Absolutely, if they’re not fair, that would be a factor.”

Who knows what “fairness” could possibly mean to a guy like Trump? Probably whatever he chooses to make it mean.

More importantly, the prospect of a very close, high-stakes major-party race for the presidency means that a Trump indie run could become a serious factor even if he loses much of his current support. We could go through two or three or eight boom and bust cycles of “Trump mania” and “Trump fatigue” without getting rid of him. So get used to it.