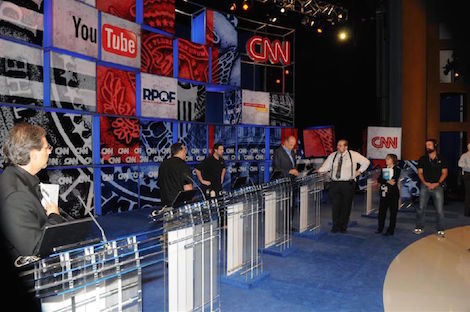 A lot of people seem really disturbed that polls are going to be used to determine who will and will not be on the stage for the first couple of Republican debates. I’ll admit that there are a number of problems with this approach, but the only other viable solution I can think of would be to have several debates and randomize which candidates will appear in each one.

Let’s start with a basic premise. It’s not worth having a debate at all if no one has more than a few minutes to talk. I think ten people is already too big, and I actually think five participants is pushing the edge of pointlessness. So, it’s completely justifiable to create some arbitrary cutoff.

Then you need some criteria that you can use to justify excluding folks. And once you’ve vetted the candidates to make sure that they’ve filed the paperwork to run and submitted financial statements that prove that they’re taking steps in that direction, there isn’t any better objective measure than an average of polls.

Honestly, what else could you use? How much money they’ve raised? How many elected officials have endorsed their campaigns?

No matter what you do, it will be somewhat unfair and it will create some kind of perverse incentive.

Now, if I had to devise a fair system, I’d count up how many people have met the basic requirements and divide by four. If there are twelve candidates, I’ll throw their names in a hat and create three separate debates with four candidates each. If they are 16 candidates, then I’ll have four debates. If they are nineteen, then I’ll have five and the last one only have three participants.

If you want, you can do the same thing but instead of dividing by four, you could divide by five, six, or seven.

Anything more than seven strikes me as clearly a waste of everyone’s time. At eight candidates, a two-hour debate would leave each candidate less than 15 minutes of total time, owing to the time wasted on introductions, questions, cross-talk, and a commercial break or two. At ten candidates, they’re fighting to get close to twelve minutes of total time. And that’s if the debate is a full two hours. I think historically a lot of debates have been only 90 minutes long.

With my solution of limiting each debate to four participants, they’d have close to a half-hour each in a two-hour debate and still more than 20 minutes each in a ninety-minute debate.

Obviously, there are some practicalities that I’m discounting a bit. Most obviously, there’s the problem with having moderators available for up to five debates, and then there’s the need for an audience and the issue with broadcasting them in near-equal near-contemporaneous primetime slots.

I’m not saying that the logistics here are easy but, where possible, simple randomness is a better introduction of unfairness than the design they’ve gone with, and randomness is hard to game and doesn’t create perverse incentives to act like a clown or a loudmouth or the biggest fire-breathing partisan of the bunch.

So, let me do this. Let me put the candidates’ names in a hat and create the debates.

For our purposes, I am going with 17 candidates, so, three debates of four and one debate of five.

I think it turned out pretty well considering it was random.

At our first debate, we’ll have five participants. It’s going to have a bit of a Mid-Atlantic flavor and the headliner is going to be New Jersey Governor Chris Christie who is grateful for the spotlight. He’ll have to contend with culture warriors Rick Santorum of Pennsylvania and Ben Carson of Maryland, and he’ll need to out-hawk Senator Lindsey Graham of South Carolina. The last participant is former Virginia Governor Jim Gilmore who will be able to discuss Christie’s actual record as an executive. This is the only debate without a frontrunner, but that could make it interesting for precisely that reason.

Our second debate will have some real fireworks. Through the luck of the draw, Jeb Bush has been matched up with The Donald, and The Donald has been matched up against his newfound nemesis, former Texas Governor Rick Perry. Perry, of course, is currently under a first-degree felony indictment, which should make for a lively topic of conversation. Also, Perry recently called Trump a cancer on conservatism. In the middle of this madness, milquetoast former New York Governor George Pataki will try to be earnest and serious. Ha! Good luck with that! The big question here is whether Jeb can escape without getting all kind of ick stuck to him.

In the third debate our headliner will be Marco Rubio, but we can call this the “Cuban debate” because it will also feature Sen. Ted Cruz of Texas. Something tells me that both men are disappointed by this draw. These two senators will have to scrap it out with Ohio Governor John “I Hate Hip-Hop” Kasich and former Arkansas Governor Mike “Everything is the Holocaust” Huckabee. What this will really be is an opportunity for Kasich and Rubio to square off for the gravitas prize. But it won’t be easy with Ted Cruz and Mike Huckabee squealing about the imminent death of everyone from Iranian Electromagnetic Pulse space weapons.

Our last debate will be headlined by Wisconsin Governor Scott Walker. He’ll be the one to defend orthodox movement conservatism against the pseudo-libertarian stylings of Kentucky Senator Rand Paul. Which one is the “authentic” conservative? While those two gentleman square off, Louisiana Governor Bobby Jindal will take time off from his exorcisms to talk about how he’s the most Christian man in America. And business woman and former CEO Carly Fiorina will wonder how she ended up down the rabbit hole and on the wrong side of the looking glass.

Say what you want about these hypothetical debates, but we’d learn more from them than we’ll ever learn from ten-people debates. And it’s a fair system to start things out. You know, there would be winners and losers and poll movement resulting from these debates, and eventually the polling data might be more meaningful and a better way of excluding some folks.

Which debate would you want to watch?