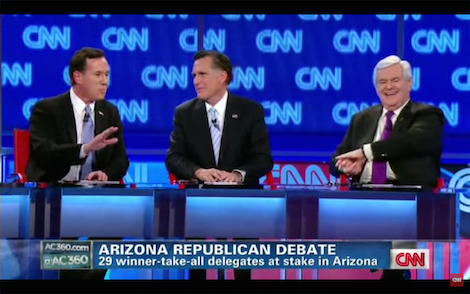 The seventeen Republican presidential candidates are currently competing for the ten available slots in next week’s debate, hosted by Fox News in Cleveland. Some of the attention thus far has been on the formula for determining who gets to participate, and who will be relegated to the 5pm “early” debate for those who don’t get a prime-time slot. But in all the jockeying for a top debate spot, it’s easy to lose sight of some of the more substantive questions about the role and impact of debates. Debates tend to produce a few memorable lines and moments – Rick Perry’s memory lapse over which government agencies he would cut, Mitt Romney’s remark about “binders full of women,” Obama remark reassuring Hillary Clinton that she’s “likeable enough” in a 2008 primary debate, to name a few recent examples. But do debates actually have an impact on how political events unfold? This question has obvious implications for (scholarly, usually untelevised) debates in political science about whether campaigns matter and about who really drives presidential nominations, primary voters or party elites. They also, of course, have implications for what, if anything, the debates scheduled in 2015 and 2016, will mean for the nomination contest. So here’s a brief overview of what we know, what we don’t know, and what it might all mean in the 2016 context.

The political science literature is fairly consistent in the finding that watching debates contributes to respondents’ knowledge about the candidates. These effects depend, unsurprisingly, on what people already know about candidates. Tom Holbrooke finds that people learn more about candidates with whom they are less familiar, and, in a study that compares watching a debate to listening to it, Jamie Druckman finds bigger differences among the “unsophisticated” participants.

For 2016 primaries, this probably means that the debates will work at cross-purposes when it comes to educating voters about the less prominent candidates in the race. We’ll obviously know more about who watched what after the event, but it seems reasonable to predict that only the most hardcore political junkies will watch the 5PM consolation debate, while the prime timed debate will be a slightly (but probably only slightly) broader audience. In other words, while debates have been shown to have some impact on citizen knowledge, these debates are structured in a way that doesn’t really take advantage of that. Not really surprising, but worth thinking about.

Research also suggests that debates can influence the factors that voters use to evaluate candidates, also known as priming. In his study of watching vs. listening to debates, Druckman notes that respondents who watched the Kennedy-Nixon debate used different criteria to evaluate the candidates than did those who heard the debate on the radio. In a meta-study of presidential debates, William Benoit, Glenn Hansen, and Rebecca Verser find that debates have “agenda-setting” effects, shaping the issues that citizens find most important, and thus use to inform their voting decisions.

With such a crowded Republican field, this kind of effect seems like it could be pretty important. In other words, what we are looking at is how voters and party elites will structure the choice of whom to back. (See this piece by Hans Noel from earlier this week). I don’t really know right now how the relevant actors are structuring their choices. Perhaps they’re deciding between two of the dominant mainstream contenders (Rubio, Walker, Bush)? Maybe deciding which of establishment candidate to support as a second choice to current frontrunner (but unlikely nominee) Donald Trump? Or perhaps the field and the polls look like they do because no clear way to structure the choice has emerged. If that’s the case, then the debates might affect the criteria that primary voters use to decide whom to support.

Primary debates are not obviously linked with the Party Decides perspective. But to the extent that elite decisions about nominations hinge on “who can best unite the party and win the general election” (TPD, 235), debates may indirectly shape what elites decide to do. Given what we know about the potential for debates to shape evaluation criteria, they might have an especially useful structuring role in the 2016 contest. As I’ve noted before, we seem to be at the end of the Reagan era (so-called for the sake of convenience), where the coalition formed around that time is losing its structure and dominance. In this context, the notable feature of the 2016 Republican field isn’t so much the number of warring party factions as the lack of clear factional fault lines at all. As I wrote a few months ago, the different candidates represent different approaches to and mixes of Republican orthodoxy, as it applies to economic, social, and foreign policy. One possibility is that debates will bring a set of clear issues to the fore, prompting primary voters to select based on personal characteristics or taxes, or immigration, or foreign policy, or whatever. This, in turn, would seem to provide party elites with clues about how to make endorsement and donation decisions. My best guess is that this is a more likely effect than learning, for the reasons I specify above.

The obvious takeaway is that while studies show that debates have some impact, these effects are conditional and the likely influence on the big picture is indirect. The debates are media events as much as political events. The first 2016 debates are sponsored by cable networks whose main goals are ratings, not civic education. Presidential debates occur at the intersection of two distinct sets of institutions, “new media” and political parties, which have their own objectives and operational logics. As a result, they have multiple goals that can work at cross-purposes, undermining what citizens or party elites hope to get out of the debates.

The beginning of debate season also reminds us of the gap between the form and the real function of various political events. Formal candidate announcements, political conventions, and some – maybe all – primaries, all have much less actual significance than their formal roles imply. These events seem to exist to entertain the most engaged citizens, while many other citizens remain outside the process altogether. Meanwhile, the really important work of politics is done informally and out of sight. While transparency has its limits, opportunities for meaningful participation and deliberation are still critical elements of democracy. In this sense, the debates work against the very values they’re supposed to uphold.