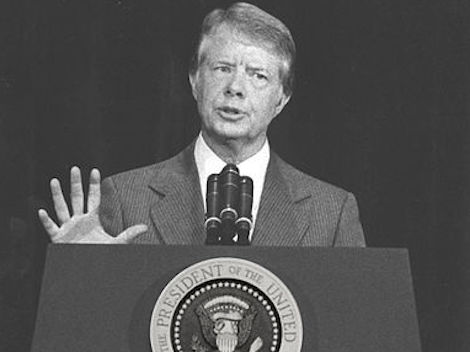 Ever since former President Jimmy Carter said this to Thom Hartmann, I’ve been pondering his remarks:

Responding to his thoughts on unlimited campaign financing, Carter told Thom Hartmann on the “Thom Harmann Program” that, “it violates the essence of what made America a great country in its political system.”

“Now it’s just an oligarchy, with unlimited political bribery being the essence of getting the nominations for president or to elect the President,” Carter said. “And the same thing applies to governors and U.S. senators and congress members.”

There is certainly a lot of truth to what he said. And Carter is not the first one to notice. But it raised some questions for me that I don’t think many people have considered. The big one being whether money in politics is the root of the issue, or the result of a much deeper problem.

We know that for too many politicians, money donated to their campaign provides access. But that has been a problem for a long time now. What’s new on the scene is Citizens United and the influence of SuperPacs on elections.

It’s important to keep in mind that people with a lot of money to invest in politics do so in an attempt to influence how people vote. It may sound obvious but, when it comes to elections, money can’t actually vote. And no matter how much money they have, the Koch brothers still only get to vote once.

What I think President Carter left out of his analysis is that too many Americans have disengaged from the political process – leaving a vacuum that has been filled with monied interests. One way to look at that is in the percentage of people who vote. Even in our last presidential election, only 57.5% of those eligible voted. But the real damage happens in midterms. In 2014 that number was down to 36.4%.

When it comes to the role of money in politics, it’s important to remember that those last two elections are the first to take place with full implementation of the Supreme Court’s decision on Citizens United. As I’ve pointed out before, even with over 40% of the population not voting in 2012, the consensus was that the big SuperPac’s spending had almost no impact. But in 2014, with almost 2/3 of the public not voting, we saw a different story altogether.

But the public’s disengagement from politics is about more than voting. We’ve all seen surveys/polls that give us information like this:

* Asked which party has the most members in the House of Representatives, 38 percent said they knew the Republicans are the majority, but 17 percent responded the Democrats, and 44 percent reported that they did not know.

Combine that with a conservative news media that actively keeps people uninformed/misinformed and you have a public that is ripe for manipulation by monied interests. But whether or not they are successful is probably dependent on the extent to which those interests are aligned with what conservative media is promoting. For example, with right wing activists in rebellion against the Republican establishment right now, it remains to be seen whether Jeb Bush’s $100 million will get him the nomination.

On the other side of the equation, the night President Obama was elected in 2008, he began his victory speech with this:

If there is anyone out there who still doubts that America is a place where all things are possible, who still wonders if the dream of our founders is alive in our time, who still questions the power of our democracy, tonight is your answer.

We had just witnessed a Black man with the name “Barack Hussein Obama” run a grassroots campaign (funded to an unprecedented degree by small donors) beat both the establishment Democrat and Republican candidates. The implications of that are still reverberating through Democratic campaigns.

That is why I believe that a reinvigoration of our democracy isn’t simply a matter of getting big money out of our elections. It has as much to do with what President Obama talked about in his speech at the 2012 Democratic convention…citizenship.

We, the people — recognize that we have responsibilities as well as rights; that our destinies are bound together; that a freedom which asks only, what’s in it for me, a freedom without a commitment to others, a freedom without love or charity or duty or patriotism, is unworthy of our founding ideals, and those who died in their defense.