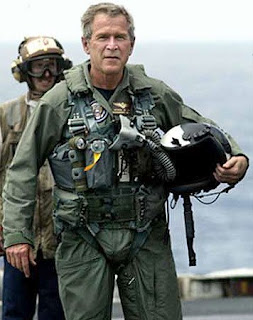 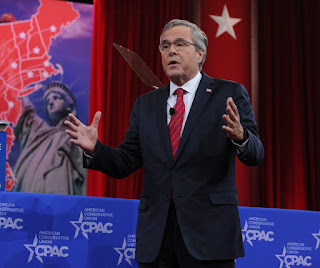 If the contest were between these two, who do you think the Republican base would go for today? That’s what I thought of when I saw this headline: Donald Trump “Emasculating” Jeb Bush. Because let’s face it, Jeb is just not the kind of guy you would ever associate with that image of his brother. But Trump…in a heartbeat.

We’re hearing a lot these days about how boys/men are being emasculated. It has become a regular theme on Fox News (who also call it the “wussification of America“) and talk radio. Why is that?

The message aimed at boys is to suggest that the only way to be a “real man” is to be a bully. Whether it’s with your fists, your bombs, or your words, it’s all about putting others down as a childish way of lifting yourself up.

But it’s also a way of denigrating men who demonstrate the capacity for compassion, empathy, thoughtfulness and cooperation. In other words, men who display charactaristics we normally associate with women. That’s because in a patriarchal culture, those qualities represent weakness.

At a time when the right wing in this country is consumed with a backlash against the inevitable demise of white male heterosexual dominance, Jeb Bush’s presidential campaign might have failed because he’s not “manly” enough – even if he weren’t showing himself to be incredibly gaffe-prone.

But this call to “manliness” from our leaders hasn’t just come from the right. While not as harsh or widespread as the conservative version, there have been many suggestions that President Obama needs to “man up” or take off his tutu and put on his boxing gloves. Calling Obama “feminized” is the heart of Maureen Dowd’s critique of this President.

All of this is a kind of sexist dog whistle. Men and women who call themselves feminists need to recognize it for what it is and call it out. We should be very clear that the presidency is no place for bullies. And rather than signifying weakness, traits like compassion, thoughtfulness and cooperation are exactly the kind of thing we’re looking for in a leader. That’s true whether the next occupant of the White House is a man or a woman.