Since Jimmy Carter’s announcements over the last few weeks about his cancer diagnosis, there’s been a bunch of articles about his legacy. Many of these focus on his post-presidential career as a humanitarian. The implicit, and sometimes stated, comparison is with his presidency, which is not considered much of a success. But to characterize Carter’s presidency as simply a failure, end of story, is to miss a great deal of its significance. Jimmy Carter was the first president to serve under the conditions that define the contemporary presidency.

Characterizing presidents as the “first” to do anything is always risky, unless you’re talking about George Washington, or the few demographic “firsts” we’ve had. Presidential scholars disagree about whether the norms and capabilities that defined the presidency were really different in the nineteenth century, and about how various types of changes – in the nomination process, in communication technology – have affected the presidency as an institution. As a result, there’s limited scholarly consensus about whether presidency was fundamentally different after the Progressive Era, or World War II, or Watergate, or whatever.

Those caveats aside, there are a few features that make Carter’s presidency distinct. He was the first president elected after the Roe v. Wade decision in 1973, and the first president elected after Watergate. The Democratic wave of “Watergate babies” had been elected to Congress and the religious right was gaining traction within the Republican Party, two factors associated with the ideological sorting of the parties.

The Carter case is an anchoring one in my book about presidential mandate-claiming – a topic that, I argue, is primarily about presidential authority rather than about the specific details of any particular election. It’s evident from my archival work that Carter’s political team looked at the presidency differently than many of his predecessors. Some of this was what I call “reimagining” the office, and it began with Nixon, but took off with Carter. After Johnson’s departure, public confidence in government began to decline, and, especially after Watergate, the idea of a strong and powerful executive branch began to seem like, well, not such a great idea after all.

The other relevant development was an infusion of morality into mainstream political discourse. This isn’t to say that politics was devoid of moral rhetoric or moral ideas before. But this specific moment not only called for a moral approach to counterbalance the abuses of the recent past; it also represented a point when major questions about the structure of society – race, gender, patriotism – were all part of the debate between parties and candidates.

These factors were probably not the main drivers of Carter’s policy agenda, but they were central to the politics of his presidency. His efforts to reconcile religious morality and a fairly conservative position on abortion with the growing importance of women’s groups in the Democratic coalition didn’t go very well, reflecting a political divide that would become more clear-cut in the ensuing years. The Carter administration also framed some of its major policy initiatives – especially on energy with phrases like “the moral equivalent of war,” only to have them crumble into piecemeal changes. As Burton and Scott Kaufman note in their book about the Carter presidency, the commitment to a human rights-oriented foreign policy also came up against practical obstacles – the necessity of taking other considerations into account and of working with allies with questionable human rights records. As Andrew Flint and Joy Porter observe, Carter was president at a time when “religious issues had entered mainstream politics.” (30) But his presidency also demonstrated the limitations of moral vision in governance.

Part of Carter’s reimagination project was his emphasis on presenting an informal and low-key image. As I’ve noted before, the presidency is caught in an ongoing dilemma between what the equality and accountability that democracy demands, and the power and formality that the office requires. Carter stressed the former; accounts of his candidacy and presidency are full of references to his plaid shirts and cardigans, and he tried to adapt the theatrical intimacy of FDR’s fireside chats. We’ve seen echoes of this with subsequent presidents – and also efforts to cultivate more conventional images.

One of the rhetorical shifts that I find in my research is the increase in defensive communication by presidents. Some of this reflects the fact that there are now more press conferences, and thus more reporters asking questions to which presidents sometimes respond defensively. Communications among Carter’s speechwriters also reveal concern with addressing critics. As polarization has increased, the defensive stance has become an even more common feature in presidential communication.

One of Carter’s least-appreciated rhetorical innovations was his tendency to confront difficulties and downsides in his public speeches. Take for example his energy speech in 1977, which began this way:

I just returned from a trip to the suburbs of Pittsburgh where we had a chance to observe from the helicopter the tremendous industrial complex along the Monongahela River. This is a concentration of production and employment that is almost unequaled anywhere else in the country.

The snowfall and severe weather–it was five degrees even up in the morning there–has created very serious problems. The natural gas supplies are down to minimum level. 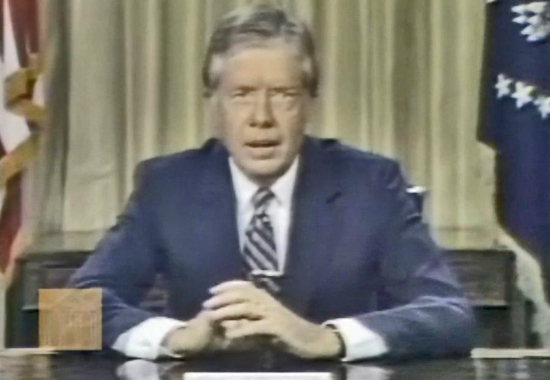 And, of course, there’s the famous 1979 “malaise” speech, when Carter told the electorate, “It’s clear that the true problems of our Nation are much deeper—deeper than gasoline lines or energy shortages, deeper even than inflation or recession.” He also called the nation’s “crisis of confidence” a “threat to American democracy.”

It’s hard to find evidence that this was a very effective rhetorical strategy. But we see lots of examples of the opposite – of rhetoric that obscures tradeoffs inherent in the policy process, that denies potential negative consequences, and that skirts difficult or nuanced questions. Scholars have labeled this “white noise,” and “the post-rhetorical presidency.”

Much of Carter’s neglected legacy can be found in the way that subsequent presidents have responded to his attempted innovations. When he was inaugurated in 1977, there were lots of reasons why Carter and his political team perceived the need to try new communication approaches. And as with any experiment, some of their efforts were less than successful. Many of the unsuccessful attempts were castigated by critics as “weakness.” As a result, they set the stage for how to convey “strength” under the new political conditions.

Some of these innovations have resurfaced in the twenty-first century. As Jason Berggren and Nicol Rae argue, Carter’s “evangelical” approach to leadership also provides context for understanding how George W. Bush framed his foreign policy.

And although the comparison is obviously politically fraught, Obama’s early depictions of goodness and American nationhood, his efforts to and his reform agenda share common ground with Carter. Different context and skills have produced different results, of course. But it would be incorrect to assume that because Carter wasn’t reelected in 1980, his ideas about the presidency disappeared completely. The problems he dealt with persisted, and some of Carter’s strategies were more effective, at least in the short term, when adapted to new contexts.

We miss a lot if we just write Carter off as a failed president with an amazing post-presidency. His presidency represented many early attempts to deal with a new political environment -one whose features continued to shape our political scene. Carter didn’t just have tough policy issues to address. He also had to wrestle with the question of how to practice presidential politics in the context of growing polarization and declining trust. None of his successors have been able to escape these questions either.

These questions have resurfaced recently in Hillary Clinton’s comments to Black Lives Matter activists. The Democratic presidential candidate suggested that politics is about changing policy, not about changing hearts. While many of the goals might be the same, this represents a fundamentally different approach to politics than we’ve seen throughout much of what we might call the post-Carter era. Clinton’s view embraces pragmatism and process; the alternative is rooted in the moral values of politics. How to best approach racial justice, criminal justice reform, and economic inequality are obviously open questions. The hearts and minds vs. policy question may have major implications going forward. When we assess Jimmy Carter’s legacy, we should acknowledge that, as president, he was an important part of this conversation.