For years I’ve been really eager to say that one of the biggest problems in higher education these days is the high level of academic debt with which many students leave school.

As I wrote earlier this year “College costs more every year, students and families borrow more and more every year, and graduate (or drop out) starting their working lives saddled with ever higher debt burdens.” And as I wrote back in 2010, all existing “repayment protections that exist—deferment, forbearance, and income-based repayment—are not sophisticated investment strategies; they’re tactics indebted people use when they don’t have enough money.”

But I was missing something really important. It turns out that most of the people with the biggest debt loads are actually doing fine. According to this paper recently released by the Brookings Institution:

Borrowers who owe the most are least likely to default.

The reason for this strange pattern? The biggest borrowers tend to become the highest earners. 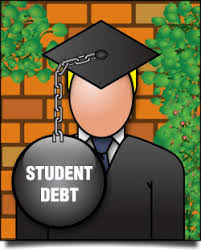 But those people, while they might feel a little more confortable with less debt, are more or less financially secure.

Defaults are concentrated among the millions of students who drop out without a degree, and they tend to have smaller debts. That is where the serious problem with student debt is. Students who attended a two- or four-year college without earning a degree are struggling to find well-paying work to pay off the debt they accumulated.

What this suggests is that, at last in terms of default avoidance (“manageable debt,” after all, is perhaps a matter of opinion), policy conversations about high debt are misguided. Those most struggling are hurting not because of how much debt they have, but how little that debt bought. Someone who gets into debt but didn’t get too far in terms of earning a degree, after all, basically didn’t get any financial benefit from going to college.