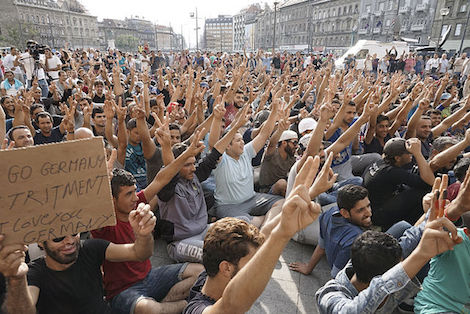 Yacoub El Hillo, the United Nations’ humanitarian coordinator in Syria, says that a million people have already been displaced by the civil war in Syria and that a million more will be displaced by the end of the year if things don’t change on the ground there. Considering that the war has been going on for four and half years now, this seems to represent a serious uptick in the rate that people are fleeing the conflict, and perhaps this is why things are beginning to come to a head in Europe and the subject of housing refugees has become a hot issue on the campaign trail.

“Unless something big is done to resolve this conflict through political means, the human train that has started moving out of Syria and the neighborhood will continue to be running for many months to come,” El Hillo told Reuters.

“Europe will be faced with a refugee situation similar to the one that led to the creation of UNHCR in 1950,” he said, referring to the establishment of the U.N. refugee agency set up to help the displaced from the Second World War.

It’s easy to forget that in 2007, the UNHCR reported that more than 1.2 million Iraqis were living in Syria as refugees from the post-U.S. invasion civil war in their country. So, President Bush really unleashed a bad form of hell on the region and now it’s like a game of refugee musical chairs.

No doubt, our country must bear a lot of responsibility for the refugee crisis and that means that we can’t turn our backs to the problem, particularly while Europe, which nearly uniformly opposed our invasion of Iraq, suffers the brunt of the consequences of our decision to initiate this catastrophe.

Having said that, I think we need to be honest. Ohio Governor John Kasich says he supports the president’s decision to open up 10,000 slots for Syrian refugees but “It’s very important that we don’t let anybody infiltrate who’s part of a radical group.”

Here’s the problem with that.

The Syrian War has morphed from its beginnings as an anti-regime uprising into a full-on sectarian war in which the Sunni powers are funding proxy armies of, frankly, religions lunatics to fight Iran’s Shiite and pro-Assad regime fanatics. Whether you are fleeing the government’s Free Syria Army, the Shiite death squads, ISIS, al-Nusra, al-Qaeda, the Islamic Front, Kurdish fighters, or some other armed faction, the problem is that everyone is at each other’s throats and few places are safe. Plus, there’s no way to make a living in anything approaching normal commerce.

With distrust and hatred so strong and refugees coming from all over, any population of refugees will reflect these tensions. Some will be bitterly opposed to the regime and Iran and others will be hostile to the religious intolerance of the Salafist forces armed and funded by Turkey, Qatar and Saudi Arabia. Still others will be angry at all sides. After all, Syria was a very ecumenical and tolerant place prior to the beginning of the uprising.

What I am saying is that you can let people resettle here out of humanitarian concern, but the civil war that they left will remain with them in their hearts and minds. You can expect them to fight each other even if they don’t fight anyone else. What Kasich is saying makes sense, but it’s the wrong way of looking at it. The war there has gone beyond “radicals” to become a generalized regional war to the death between religious nuts, with secularists and moderates completely left out of the picture. This has been the problem from the beginning and the reason that the president wisely opted not to follow Hillary Clinton’s advice to get us bogged down in supporting the Sunni side against the Shiite side.

Europe has a harder time assimilating Muslim immigrants than we do, so maybe these influxes of refugees won’t present us with as many problems, but we ought to recognize that there are risks to becoming the sanctuary for tens of thousands of people who are warring with each other over the religious and political future of their home region. Because we helped create this problem, we should accept those risks as part of the price for allowing Dick and George to start this excellent adventure, but we shouldn’t have our eyes closed about it.

Finally, it’s easy to say that the civil war in Syria and the broader sectarian conflict in the Middle East are not our problem, or are not Europe’s problem. But, when you start getting significant refugee flows that present real security risks, then the conflict is our problem and we need to intervene.

How we intervene is critically important, because our goal cannot be to assist one side in prevailing military, politically, and culturally over the other. Obama’s refusal to attempt this so far has angered the Sunni powers, Israel, and our foreign policy establishment, but our close ties to the Sunnis and bad relationship with the Shiites was always more an accident of history than a statement of preference or values. And, in any case, having overthrown the Sunnis in Iraq and handed control to the Shiites there, we now have important allies/proxies in both camps. This is why Obama saw the nuclear deal with Iran as being a stepping stone to regional peacemaking while so many others saw it as helping Iran in their efforts to win the sectarian conflict against the Sunnis.

This is one of the toughest foreign policy problems we have ever faced as a country and the president has understood it in the proper context. His probable successor does not see it in the proper context, but neither do any of her competitors on the Democratic or Republicans sides. In fact, only Biden knows and agrees with the president’s thinking and is likely to continue the policy of neutrality in the conflict.

You can talk about the bankruptcy bill or the crime bill or Anita Hill until the cows come home, but when it comes to Biden vs. the rest of the Democratic field, this is the main argument in his favor.