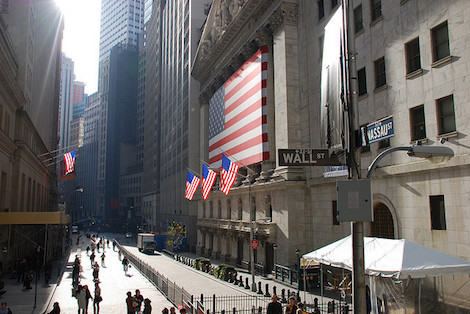 Until you stop and realize that what these people think and do affects all of us whether we like it or not, Ben White’s piece at Politico on the horror being experienced on Wall Street each day Donald Trump fails to go away is a rich opportunity for sheer schadenfreude. Here are a few tidbits:

“Most people in the New York business community don’t really like to speak publicly about politicians and especially not Trump, because he will just jump ugly all over them,” said Kathryn Wylde, president and CEO of the New York City Partnership, a group that includes many of the city’s top business leaders. “Trump has never really been part of the New York City business community or particularly engaged with the real estate community. There’s certainly no close set of relations there. He’s really a lone wolf. And a lot of these people thought Jeb Bush was a shoo-in and they are upset now because they have already thrown in with him and he is looking a little wilted.”

Jeb Bush a shoo-in? No more:

“I held four lunches for investors in August and at the first one everyone assumed Trump would implode,” said Byron Wien, vice chairman of Blackstone Advisory Partners and a senior figure on Wall Street. “By the fourth one everyone was taking him very seriously. He taps into frustrations that are very real and he is a master manipulator of the media.”

But here’s my favorite:

I know it’s not fair or accurate to generalize too much about large, diverse sets of institutions like those which constitute the financial sector, but still: you know a lot of these birds have contributed lavishly over the years to campaigns and publications that batten on precisely the kind of white identity grievance politics that Donald Trump is exploiting so skillfully. Hell, you only have to go back four years, to a Romney campaign that practically invented the term “self-deportation” to explain a policy of deliberate immiseration of immigrants; that made up a racially-saturated fable of Obama “gutting” welfare reform; that constantly told older white folks that Democrats were stealing their Medicare benefits to give them to those people via Obamacare. Add in the relentless attacks on “Washington” and Big Government that have become sec on nature to GOP pols, and it becomes obvious they have been playing with matches for a long time, and a fire has finally broken out that doesn’t limit itself to the boundaries of respectable demagoguery.

So cry me a river, Wall Street folk. If you don’t know any Trump voters, you might want to get out of Megalopolis now and then and meet your party’s base up close.