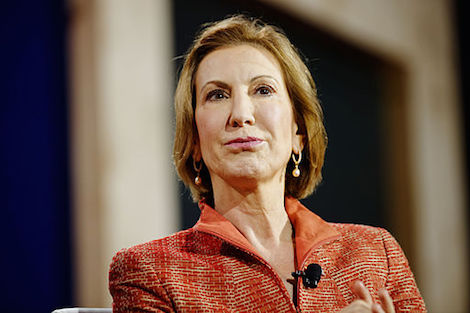 As you may recall, Carly Fiorina’s ace-in-the-hole in what would otherwise be an inscrutable or extremely marginal presidential campaign is that the entire Republican Party thought it would be useful to have a woman in the field to say nasty things about the putative Democratic nominee without sounding all grunt-grunt-piggy-piggy. That has offset her terrible resume and placed her on the Big Stage for Wednesday night.

But something even more marvelous has happened to Fiorina: now the GOP is counting on her to take down Donald Trump, that essential but terrifying task nobody else wants to or understands how to carry out. That’s because, as Mark Halperin hinted in the piece I just lampooned a few minutes ago, party elites think Trump’s own grunt-grunt-piggy-piggy tendencies are a potentially fatal weakness.

I dunno; Trump sure survived his supposedly reckless attack on Megyn Kelly in pretty good form, didn’t he? On the other hand, Fiorina’s reponse (or rather, the response by the Super-PAC with which Fiorina is not, of course, “coordinating”) to Trump mocking her face was mighty slick:

We’ll see what happens Wednesday, but at some point the Republicans pushing Carly Fiorina into these unlikely starring roles are going to wake up and realize the price for her cooperation has now probably reached the Veep stage, and could even make her a viable candidate for president. And then they are going to look at that resume again and…I dunno, call for someone else to take her down, I suppose. It’s probably too late for this cycle, but you’d think maybe a few Republicans would conclude the best way for their party to deal with their various grunt-grunt-piggy-piggy problems is to stop behaving that way.