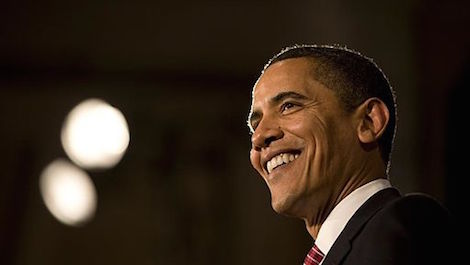 By now we all know that Ben Carson’s schtick has come down to railing against political correctness. I’d venture that Monday, President Obama served up a whole helping of cognitive dissonance for Carson to chew on about all that.

At a town hall meeting in Iowa on higher education, the President pretty effectively smacked down Carson’s proposal to cut funding to colleges that demonstrate political bias.

The idea that you’d have somebody in government making a decision about what you should think ahead of time or what you should be taught, and if it’s not the right thought or idea or perspective or philosophy, that that person would be — that they wouldn’t get funding runs contrary to everything we believe about education. I mean, I guess that might work in the Soviet Union, but it doesn’t work here. That’s not who we are. That’s not what we’re about.

Then he went on to talk about how political correctness can actually be a problem on college campuses.

It’s not just sometimes folks who are mad that colleges are too liberal that have a problem. Sometimes there are folks on college campuses who are liberal, and maybe even agree with me on a bunch of issues, who sometimes aren’t listening to the other side, and that’s a problem too. I’ve heard some college campuses where they don’t want to have a guest speaker who is too conservative or they don’t want to read a book if it has language that is offensive to African-Americans or somehow sends a demeaning signal towards women. I gotta tell you, I don’t agree with that either. I don’t agree that you, when you become students at colleges, have to be coddled and protected from different points of view. I think you should be able to — anybody who comes to speak to you and you disagree with, you should have an argument with ‘em. But you shouldn’t silence them by saying, “You can’t come because I’m too sensitive to hear what you have to say.” That’s not the way we learn either.

That part about not “listening to the other side” is quintessential Obama – if conservatives like Ben Carson would ever actually pay attention.

The whole exchange reminded me of how – way back in 2009 – President Obama was actually in a position to walk his talk on this. In case you might have forgotten, he was invited to give the commencement address at Notre Dame, where he would also receive an honorary degree. Demonstrating that political correctness isn’t just for liberals on college campuses, pro-life students objected and there was even some talk in the media about how the President should be uninvited. But Obama went to Notre Dame, dove right into the controversy to discuss abortion and gave what I think was one of the most profound speeches of his presidency.

This generation, your generation is the one that must find a path back to prosperity and decide how we respond to a global economy that left millions behind even before the most recent crisis hit — an economy where greed and short-term thinking were too often rewarded at the expense of fairness, and diligence, and an honest day’s work. Your generation must decide how to save God’s creation from a changing climate that threatens to destroy it. Your generation must seek peace at a time when there are those who will stop at nothing to do us harm, and when weapons in the hands of a few can destroy the many. And we must find a way to reconcile our ever-shrinking world with its ever-growing diversity — diversity of thought, diversity of culture, and diversity of belief.

In short, we must find a way to live together as one human family.

And it’s this last challenge that I’d like to talk about today…For the major threats we face in the 21st century — whether it’s global recession or violent extremism; the spread of nuclear weapons or pandemic disease — these things do not discriminate. They do not recognize borders. They do not see color. They do not target specific ethnic groups.

Moreover, no one person, or religion, or nation can meet these challenges alone. Our very survival has never required greater cooperation and greater understanding among all people from all places than at this moment in history. Unfortunately, finding that common ground — recognizing that our fates are tied up, as Dr. King said, in a “single garment of destiny” — is not easy…

The question, then — the question then is how do we work through these conflicts? Is it possible for us to join hands in common effort? As citizens of a vibrant and varied democracy, how do we engage in vigorous debate? How does each of us remain firm in our principles, and fight for what we consider right, without, as Father John said, demonetizing those with just as strongly held convictions on the other side?

And of course, nowhere do these questions come up more powerfully than on the issue of abortion…

…in this world of competing claims about what is right and what is true, have confidence in the values with which you’ve been raised and educated. Be unafraid to speak your mind when those values are at stake. Hold firm to your faith and allow it to guide you on your journey. In other words, stand as a lighthouse. But remember, too, that you can be a crossroads. Remember, too, that the ultimate irony of faith is that it necessarily admits doubt. It’s the belief in things not seen…

And this doubt should not push us away from our faith. But it should humble us. It should temper our passions, cause us to be wary of too much self-righteousness. It should compel us to remain open and curious and eager to continue the spiritual and moral debate that began for so many of you within the walls of Notre Dame.

The crassness of the debate we’re hearing these days about “political correctness” rings completely hollow and petty when compared to that kind of depth and wisdom.

The Washington Monthly explores the policy consequences of a second Trump term.

There's a backdoor tactic the administration would use to weaken programs that help the poor.


Please support this website by adding us to your whitelist in your ad blocker. Ads are what helps us bring you premium content! Thank you!