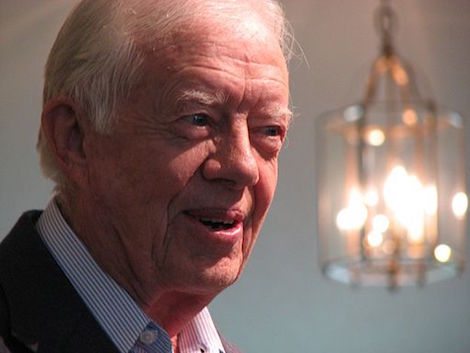 Michael Barone is a colossal hack (not a total insult in my vocabulary), but not a big conservative ideologue. He rarely strays from the comfortable conventions of Beltway Republicanism. So when he comes up with something astounding, you have to figure it may be in tomorrow’s talking points all over the GOP Establishment.

In this presidential cycle, voters in both parties, to the surprise of the punditocracy, are rejecting experienced political leaders. They’re willfully suspending disbelief in challengers who would have been considered laughable in earlier years.

Polls show more Republicans preferring three candidates who have never held elective office over 14 candidates who have served a combined total of 150 years as governors or in Congress. Most Democrats are declining to favor a candidate who spent eight years in the White House and the Senate and four as secretary of state.

Never mind that on the Democratic side the supposed beneficiary of this hatred of experience is a guy who’s been in public office for 32 years, or perhaps (if he runs) Obama’s own vice president, who’s been in high office in Washington for 42 years. But don’t let me distract you from Barone’s line of argument:

But in our system the widespread rejection of experienced leaders ultimately comes from dismay at the leader in the White House.

Watch in awe as he plants that axiom deeply in the column and then races past the gates of delirium!

Republican voters are frustrated and angry because for six years they have believed they have public opinion on their side, but their congressional leaders have failed to prevail on high visibility issues. Their successes (clamping down on domestic discretionary spending) have been invisible. They haven’t made gains through compromise because Obama, unlike his two predecessors, lacks both the inclination and ability to make deals.

Where was Barone in 2011? Or for that matter, in 2009 when Mitch McConnell announced his conference’s goal would be to make Obama a one-term president?

[A] president who came to office with relatively little experience has managed to tarnish experience, incumbency and institutions: a fundamental transformation indeed.

Now I can understand why Republicans psychologically would prefer to disclaim any responsibility for the apparent madness that has overtaken big elements of their own party. But blaming Obama for, say, Donald Trump is so laughable that I’m amazed Barone could bring himself to suggest it. Wouldn’t you say the decades that conservatives have devoted to delegitimizing government and demonizing compromise might have a little more to do with this year’s revolt than Obama’s refusal to go along with the repeal of his major accomplishments and betray everybody who voted for him?

There is one thing Barone does convince me of, it’s this: if you thought the GOP habit of blaming Jimmy Carter for every bad thing that happened for many years after he left office was bizarre, you ain’t seen nothing yet. The myth of Obama the Tyrant will live on in the conservative imagination for many years to come.