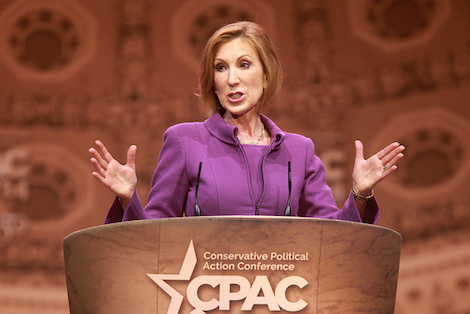 In terms of last night’s Republican debate, this is an instance where conventional wisdom is probably right…Carly Fiorina “won.” And while I am usually loath to make political predictions, I think its a pretty sure bet that over the next couple of weeks we’ll see that translated into rising poll numbers.

What’s interesting about this is that the Republican base has been itching to support a political “outsider” – which has put them at odds with establishment love for candidates like Jeb Bush and Marco Rubio (the latter of whom also helped himself with his performance last night). But based on what I’m reading this morning, it looks like the establishment has finally found an outsider they can embrace in Carly Fiorina.

Last night Fiorina was articulate, forceful and came off as “presidential.” In doing so, she demonstrated that there is a clear policy vacuum when it comes to Donald Trump. I have no doubt that his hardcore nativist base will continue to support him. But there is now some very real competition for those Republicans who have been uncomfortable with his candidacy.

As Democrats, last night gave us some good insight about Carly Fiorina. While being articulate, she was grossly negligent when it came to facts. Steve Benen did a good job of summarizing that (click on the links for the specifics).

Her rhetoric about Planned Parenthood was plainly at odds with reality. She said it takes “two-thirds of the states” to ratify a constitutional amendment, but it actually takes three-fourths. Her comments about the criminal justice system were simply untrue. She insisted that Democrats, who’ve been pleading with Republicans for years to pass immigration reform, “don’t want” to pass immigration reform. Her defense of her failed tenure at HP was hard to take seriously. Her rhetoric about foreign policy was “bizarre.”

So what does that tell us about Fiorina? It’s obvious that she’s a smart woman and prepared very well for this debate. So I doubt that any of those arguments were based on ignorance. What it tells us about her is that she is a gifted liar (I’d suggest, the best on that stage last night) – and is not real worried about being outed as such. After all…the Republicans have shown over and over again that they are in an age of “truthiness.” In other words, if it sounds good and reinforces my biases, it must be true.

Last night Carly Fiorina put on a masterful performance. I don’t know that it means she’ll get the nomination. But I doubt she’ll be making the kinds of gaffes/mistakes that sunk the candidacies of people like Rick Perry and Herman Cain last time around. And she has a lot of potential to bridge the gap that has developed between the Republican base and establishment. That means she’ll be one of the “top tier” contenders for a while.